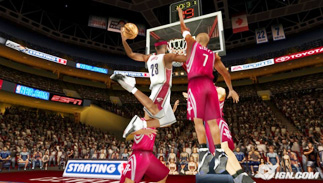 NBA Live 07 is like being in an actual NBA game. The graphics are smooth and the sound is realistic. Game players can choose different playing modes including Play Now, Season, Dynasty, Playoffs and All-Star Weekend.
All of these modes are good and make players feel as if they are on the court, playing against the world’s best basketball teams.
The variety of dunks and shots, including a fade away, only heightens the excitement. For those who wish to feel more like the manager of a team there is the Dynasty mode. The players have to pick coaches, assistant trainers, players and so forth. Personally I found this mode a bit boring.
Some newly added mini games such as the two ball, which pits a player against the computer in jump shots is another feature that spices up NBA Live 07. In the two ball pit, players try to be the first to reach 50 points and must shoot baskets from within circles on the court.
Of course not much has changed from NBA Live 06 but this version is still a worthwhile investment.
By Lee Ho-jeong 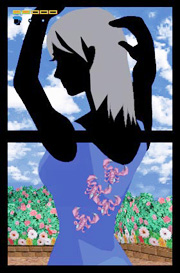 It’s always hard to complain about a game like “Feel the Magic.” It’s got creative design, fun music, an offbeat premise and appealing art work, and it makes maximum use of the DS’s touch pad and microphone.
The only problem is it’s just not much fun.
“Feel the Magic” is a collection of minigames bound together very loosely by a story. You are a black silhouette in a goldfish T-shirt who has the hots for a female black silhouette in a blue dress. To win her heart you join a performance group, the Rub Rabbits. (The Japanese pronounce the English words “rub” and “love” the same ― cute, yes?)
The music deserves mention for its unique combination of synth and scat, complementing the stylish visuals.
The games themselves are odd ― the first involves massaging goldfish out of a man’s stomach to force him to throw up, while another has you defeating 100 bulls. Most are fun the first time through, but only one or two hold up to repeat plays, and none of the gameplay is particularly addictive. It’s a shame, because in all other aspects “Feel the Magic” really is a model DS title.