[Review]‘Illusionist’ may as well just disappear

[Review]‘Illusionist’ may as well just disappear 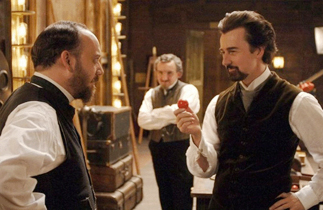 Paul Giamatti, left, as a police inspector squares off against Edward Norton as the manipulative magician Eisenheim in “The Illusionist.”

It bears pointing out that “The Illusionist” and “The Prestige” are entirely unrelated films, although on the surface there are some similarities.
Both are the fruits of long, independent creative processes by devoted filmmakers. Both also feature 19th century stage magicians locked in intrigue, take many of the same plot turns, and pivot on the question of whether a magician in love can cheat death. And both were released at roughly the same time. So a comparison is inevitable.
And though “The Illusionist” is enjoyable enough, Christopher Nolan’s “The Prestige” is clearly the more entertaining entry.
In “The Illusionist,” a peasant boy with a penchant for magic tricks falls in love with a noble girl only to be separated from her by her family. Fifteen years later, he turns up again as a performer in Vienna with the stage name Eisenheim (Edward Norton), and she is a duchess (Jessica Biel) set to be married against her will to the crown prince (Rufus Sewell) and inherit the empire through a scheme to overthrow the crown.
Again like “The Prestige,” “The Illusionist” is rather awkwardly framed, beginning with the chief inspector (Paul Giametti) arresting Eisenheim and then backtracking through the detective’s narration to fill in the blanks.
When the duchess turns up dead, all the evidence points to the crown prince, and Eisenheim, determined to expose him, locks horns with the conflicted inspector. Of course, as it turns out the detective doesn’t have the whole story.
For a film outside the Hollywood system, “The Illusionist” is impressively well polished. Vienna is radiant and well-shot, and the period costuming and sets are excellent and exhaustive.
The key illusion, in which Eisenheim claims to bring spirits back from the dead, is convincing, but the simpler illusions are less elegantly presented, with some obvious cuts to replace a locket with its “transformed” version.
Giamatti puts in the standout performance here, carrying the film through the script’s rough spots and valiantly handling the lazily written voiceover sections.
Norton, when on stage as Eisenheim, also commands great attention, but in his quiet moments with the duchess he remains stone-faced and somewhat two-dimensional.
The music by Philip Glass is atmospheric but full of repetitive scale snippets, and the end result only worsens the film’s sometimes plodding pace.
Like the work of its soundtrack composer, “The Illusionist” grabs just enough attention to keep its audience awake to the end. Its texture is a bit like oatmeal ― chewy, not unpleasant, but never quite interesting or exciting. The great revelation at the conclusion (if it even comes as a surprise to anyone) is unlikely to elicit anything much beyond a momentary fluttering of the eyelids.
Independent of “The Prestige,” “The Illusionist” is a momentary sentimental diversion. But, unfortunately, the Nolans’ film accomplishes what “The Illusionist” attempts so successfully and with so much less cloying sentimentality, that the latter film is hardly worth seeing.