There’s more to color than meets the eye

There’s more to color than meets the eye 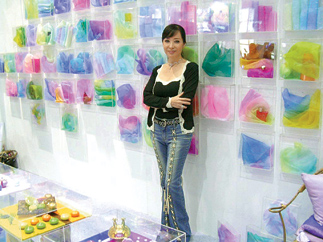 If you want to change your future, change your personal color ― or so says Kim Min-kyoung, a frontier color consultant (or “colorist”) who has been working in Korea for nearly 15 years. “One of the most important elements in life is light. Light and color go beyond the visual. Color influences everything from personality and intuition to creativity and mood,” she said.
After studying design at university, Ms. Kim went abroad to Paris to study design and painting but found what she really was interested in pursuing was a bit more specific. “I stumbled upon a textile factory in France and was amazed at how many different kinds of blue they had. When I was studying art in Korea, I was only taught four or five major variations of the color,” Ms. Kim said.
From Paris, Ms. Kim went to Belgium, Germany and Japan, to study color and color-related fields including fashion and cosmetics. She has published more than 15 books on color and is now the head of KMK Color Institute, among a list of other titles, including being a lecturer at Sookmyung Women’s University.
In the early 1990s, when Ms. Kim first arrived in Korea after 15 years of study abroad, the field of color was unknown territory for both the public and for corporations. “The concept of color marketing was very new to them,” she said.
She founded KMK Color Institute and R&D Center and started her first project in Korea with a local cosmetics company, Julia Cosmetics. After the successful start with Julia, she began to receive numerous offers from the nation’s top cosmetics companies. One of the most memorable items she remembers launching is Korea’s first pearl-based lipstick in the mid-1990s. “It was a big hit. People had not seen lipstick with that sort of light-reflective quality,” she said.
The most important influence on color trends, she notes, is the socio-economic current. “For example, right after Sept. 11, soft, feminine colors were popular in contrast to the tragic incident. During the IMF crisis [1997~1998], stimulating, exciting colors such as red gained attention as opposed to more somber colors such as black. This was because people needed something to revive their spirits during this economic turmoil,” she said.
After the monetary crisis in Korea, from around 1998, Korea’s color marketing spread to a different plateau, with companies such as LG beginning to succeed overseas, especially in Europe and the United States. “I was involved in several projects with LG. They were one of the first companies to start paying attention to color.”
Ms. Kim stresses the importance of color in product marketing. “Color is the last crucial packaging for a product. As we embark upon the 21st century, the mass market is very much an ‘emotional’ as well as a visual market. In other words, personality and taste is much more important than [it was] say, 10 years ago,” she said.
The 21st century to the color expert, is the “watercolor era,” in which color is diversified and personal preference overrides trends. “Nowadays, people do not choose a product just because it is a trend. They are starting to rely more on personal preference,” she said, adding that this kind of phenomenon is much more apparent when choosing costly products, such as cars.
This personal taste however, is less random than it appears to be. “Color trends inevitably are a result of meticulous research and statistics,” she said. Her color center, which has a total of 17 researchers, is involved in setting up these standards and connecting them to the mass market.
“The number of colors which the average human being can perceive is 2,500,000. Nature has 7,500,000 colors. It is my job to categorize and develop these colors and introduce them to the public,” she said.
Ms. Kim is busy working with an IT company in Hong King and a nail therapy center, which opened recently, called Diana Nail Therapy. She also gives lectures in universities, including one that just ended in February at Yongin University titled “2007~2008 S/S Trend Color Seminar.”