Original hip-hop with a social conscience

Original hip-hop with a social conscience

From left to right: Blu Rum 13, Yarah Bravo and D.J. Vladim of the international hip-hop collective One Self. Provided by One Self

For those who have yearned for an escape from the pervasive mainstream of cloying ballads that seem to drip from the speakers of every restaurant and bar in Korea, Club Cargo holds the key. Long hailed as the savior of underground music in the capital, Cargo will bring in the hip-hop super-group One Self tomorrow night. The international collective from famed independent label Ninja Tune will make their first visit to the peninsula, bringing with them a style of music Seoulites are hard-pressed to find locally: their own brand of soulful, thought-provoking hip-hop.
The group formed around D.J. Vladim during the North American leg of his 24-country 2003 tour with the Russian Percussion collective, which he put together to promote his album “USSR: Life From the Other Side.” Among the fluid lineup of the Percussion was beatboxer Killa Kela, whom Vladim himself discovered. The other two members of One Self, Yarah Bravo and Blu Rum 13, did separate stints as front vocalist for the collective before the three became a fixed group.
Vladim, a prolific staple of the international hip-hop scene, has a long resume that includes overlapping work as a producer, promoter, writer and radio presenter, as well as a record collector and painter. Born in Russia and raised in London, he has been a D.J. around the world for well over a decade. In between world tours, he founded the label Jazz Fudge in 1995, worked with artists from the Pharcyde to Paul Weller, released a string of albums and mix tapes, and formed One Self, which is now creating a whole new buzz of its own. 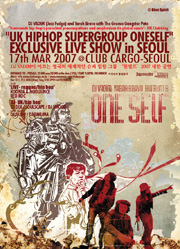 Catch One Self at Club Cargo in Hongdae tomorrow night. Groove Gangsta will be filling in for Blu Rum 13.

Yarah Bravo, a striking Swedish-born M.C. with a Chilean mother and a Brazilian father, is not only the female voice on Vladim’s beats, but also the one in his ear, as the two are husband and wife. She claims that the formation of One Self was actually her idea, and that she pushed Vladim to realize his plans of setting up a core collective after many years of collaborating with a wide range of vocalists. Her soft tones evoke the Digable Planets as she effortlessly crosses between rap, spoken-word poetry and R & B.
New York rapper Blu Rum 13 usually rounds out the core group. But, as is the nature of a collective, he will be replaced by percussionist Groove Gangsta Pete for the Korea show due to obligations with other projects. Blu Rum came into contact with D.J. Vladim when his group Groundwerx opened for the Russian Percussion on the 2003 tour. When Yarah Bravo wasn’t able to do a stretch of gigs, Blu Rum stepped up into the position of front man. In 2005 they released their first album as One Self, “Children of Possibility,” to critical acclaim.
With the addition of the Groove Gangsta’s wide array of percussion, One Self will offer a modern meld of intelligent hip-hop, soul and socially conscious positivity. Their performance tomorrow night, especially at an intimate venue such as Cargo, will be a rare opportunity for lovers of original new music to get up close and personal with these rapidly rising stars.