On the heels of retirement

On the heels of retirement 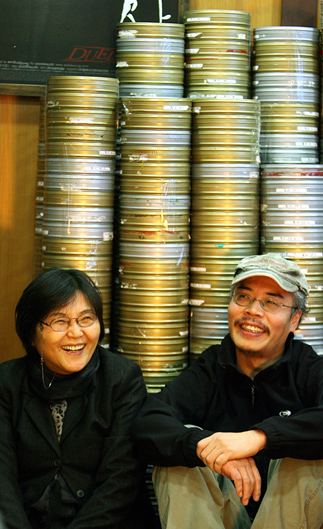 There is a fragile-looking elderly lady looking out from the set of Lee Myung-se’s latest film, “M.” She’s Song Hye-suk, 66, a retired professor at the Seoul Institute of the Arts who is considered the godmother of the local film and theater scene. A sign of her success, her retirement ceremony was filled with her top-notch-celebrity pupils, including the film director Jang Jin, and actors Kim Su-ro, Yu Hae-jin, and Cheon Mu-song, to name a few.
Mr. Lee, 50, a renowned stylistic director, was also one of her talented students. A member of the class of ’77 at the Seoul Institute of the Arts, Mr. Lee has been her student for three decades. Ms. Song is on the set to work on “Finding M,” a documentary about the making of Mr. Lee’s film, and “A Documentary ― Lee Myung-se.” It has been her goal to film documentaries after she retires.
Ms. Song is not only Mr. Lee’s mentor, but also a big fan.
“When I watched his first short film for an assignment in a directing class, I knew immediately that Lee was exceptionally talented,” she says. “He is a true film genius.”
As the oldest person on the set, Ms. Song’s passion and strength have made her the first to arrive over the last four months. Filming started last November and will end at the end of this month. “M” seems almost like a code that only the two of them can decipher.

How did the project come together?
Song: I have always been fond of films, and filming a documentary has been my long-time dream, not to mention that I have been a huge fan of director Lee and his movies. He used to say he would invest in my documentary when he makes enough money, and there was no reason for me to turn down his offer. He kept his promise by providing me with the film set for my documentary. With one of the former students I took a short intensive lesson on filming, and came to the set.

Isn’t it sometimes burdensome to have an elderly person on the set?
Lee: Not in the least bit. In the States it is not unusual to see directors, producers or crew members over the age of 80. However, in Korea that is not the case. I feel that there should be more people like professor Song. She brings refreshments, snacks and even medicine for the crew. Over the years, we have grown so close that she almost feels like family. Cho Seong-woo, the music director, even asked me if I really was one of her pupils.

How would you evaluate Lee’s movies?
Song: In my opinion, he is the only writer/ director in Korea to create genuine films without focusing too much on the narrative. It was distressing to see his movies being misinterpreted and not given the credit they deserve. Director Lee tries to communicate through the rhythm, colors and mise-en-scene in his movies, but critics only focused on the plot. I think this is due to the strong influence of leftist movies and thesis movies, which emphasize the message over the movie’s style.

What does the title of the documentary, “Finding M,” mean?
Song: Director Lee is still in search of movies. Mise-en-scene, motion and movie all start with the letter M. Furthermore, the title of his new movie is “M,” and the main character is Min-woo, which also starts with an M. Subsequently, “M” represents a maze that director Lee is still trying to find his way through. Rehearsals, actors’ make-up, lighting, designs, and sets will all be included in “Finding M.”

Your last film, “Duelist,” received mixed reviews. You expressed the characters’ emotions through images rather than plot. How many of your intentions were fulfilled through the film?
Lee: Frankly, there is no such thing as a new story or plot. It does not matter whether a movie has a fresh plot, what is important is that it has its own style. People say that Korean movies have diversified in terms of subject, however the diversity of style has been lost. I intend to go my own way in “M” as well.

What was director Lee like as a student?
Song: When it came to images, he had a special talent. Even as a student he was only concerned about films, as he is now. We have always shared similar views on films, and even after graduating, director Lee consulted me about his scenarios.
Lee: In the words of the famous poet Charles-Pierre Baudelaire, “A poet should always think of poetry.” I do not consider myself as being extremely talented in making films. Thus, I need to concentrate all my energy in my films in order to succeed. Even most of my dreams are related to films. Alfred Hitchcock, Yasujiro Ozu, Orson Welles and Kim Su-yong are frequent visitors to my dreams. In the dreams, I would go into theaters and realize that my films are in fact directed by other directors. It’s somewhat similar to students having nightmares about important exams.

This is your first film. How is it different from working in theater?
Song: In theater, actors perform in front of a live audience in a limited space. There is an energy and passion that films lack. However, films have freedom and leave room to expand. I feel I am gaining more insight into the differences between the two. I used to think that the two are very similar, however, my experiences tell me that it is almost impossible to apply method acting in films.
Lee: If a theater performance is a chain of emotions, acting in films is expressing the present moment. It is a misconception that actors need to know everything about the character and his situation. The actor only needs to concentrate on each given scene. Plus, there is a sense of emotion in each scene in a film. Actors tend to concentrate on more delicate facial expression in close-ups. However it is best for them to stay still since each scene has its own sensation. In this film, I collaborated with actor Kang Dong-won for the second time. I aspire to break the stereotype of “film performance.” Normally, wailing scenes or playing disabled characters are considered excellent performances. However, I personally think understanding the scene and delivering it with accuracy should be the standard of a good performance. Often, actors like Kang Dong-won and Jang Dong-geon have the advantage of not having to act as well as others to meet the standard. Their natural characteristics should be evaluated as part of their performance. In the case of Kang Dong-won, he instinctively understands what I expect in a certain scene.
Song: Getting to know actor Kang Dong-won was a pleasant surprise. I feel that he might have a similar DNA structure to director Lee. He is a quick-witted, sensitive actor. Viewers of director Lee’s “M” will surely discover genuine film performance and experiments with images.