Weather not an exact science

Weather not an exact science 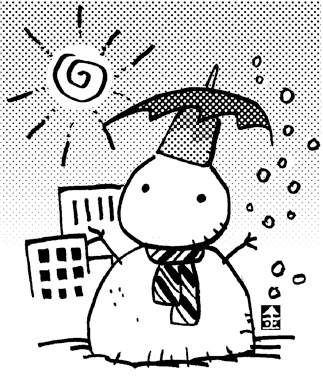 Predicting the weather is always tricky. The Korean Meteorological Administration has difficulty forecasting the weather because the weather is so fickle, and their forecasts can be inaccurate. Recent erroneous weather forecasts have prompted some to call the administration “the boy who cried wolf.”
Increasing the accuracy of weather forecasts, however, is not a simple task because, fundamentally, weather forecasts are destined to be fallacious. The science of forecasting weather has been in existence for only a short time. Before people invented equipment that could accurately observe meteorological conditions, people predicted weather through experience and human senses. Galileo invented a crude thermometer in the early 1600s, and Benjamin Franklin discovered in 1773 that meteorological phenomena moved regionally. Weather charts that display expansive regional meteorological patterns were used in forecasting weather only after the wireless telegraph was invented in the 19th century. During the middle of the 20th century, high-tech meteorological equipment like artificial satellites and meteorological radar were invented, along with a supercomputer that could process vast amounts of meteorological information. The era of “numerical forecasting” began; forecasters used current meteorological data to calculate future weather.
Using a supercomputer to analyze the prodigious amount of information that can influence the weather to increase the accuracy of forecasts has its limits because of the so-called “butterfly” effect, a term coined in 1961 by American scholar Edward Lorentz. “The flap of a butterfly’s wing in Brazil can set off a tornado in Texas.” This suggests that small early meteorological conditions produce large variations. Regardless of how elaborate a weather forecasting model may be, if the initial data is slightly off, the forecast results will change dramatically. Augmentation of weather information and more elaborate models for forecasting do not guarantee weather forecasts that are more accurate. Precise numbers do not ensure precise forecasts. Human beings are left with the task of analyzing the numbers produced by computers and forecasting the weather.
The Korean Meteorological Administration has announced plans to annually increase the accuracy of its weather forecasts by 0.2 percentage points. If things go as planned, they will increase the current forecast accuracy of 86.2 percent to 87 percent by 2011, which is a margin everyday people will fail to notice. Forecasting the weather accurately may be beyond human ability, but it is good to know they are trying.