Do right, or do nothing

Do right, or do nothing 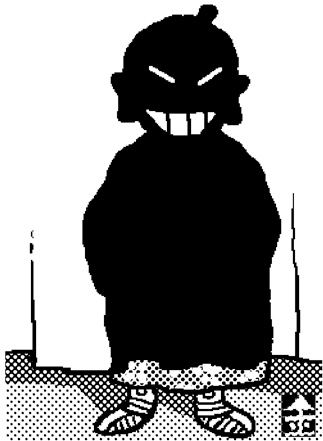 Hwan On was an ambitious man aspiring to be a king in East Jin. He received help in accomplishing his dream from another man named Guk Cho. In fact, their relationship was so close that it created a rumor in the East Jin society that Guk made a puppet of Hwan.
A few aristocrats who possessed the economic might of East Jin were the only competing power which could stop the royal ambition of Hwan. One day, Sa Ahn, a pre-eminent man who represented the aristocratic force, called on Hwan, causing much nervousness in his host. Thus Hwan placed his aide, Guk Cho, behind a curtain so that Guk could watch every move of his visitor. But suddenly a wind blew in while the anxious host was conversing with his unwelcome guest. The wind curled up a curtain that shrouded the eavesdropping man. Sa Ahn, well aware of his host’s close relationship with the inquisitive man, managed to hide his consternation and remarked amusingly that Mr. Guk was indeed a guest worth inviting for an intimate talk.
This is an anecdote in the Book of Jin, volume 67. It reveals the meaning of an aide behind a curtain, that is, a very close aide in modern language. A curtain is usually a tool to hide oneself from the gaze of others, creating an exclusive, private space. An aide invited behind the curtain is bound to have a very private relationship with the boss.
The term makryo, or special aide, was created before this anecdote. A general’s war camp in the Han dynasty used to be surrounded by blankets.
A vertical blanket was called a mak, which pertains to what is translated as a curtain here. A camp made of mak was a place in which a general stayed and later settled, called makbu, or Bakufu in Japanese. Those who served a general within the mak were a special aide corps and were sometimes called makjik, or curtain posts.
Coterie of shoguns in Japan in the past and groups of tacticians of each powerful man in the Qing dynasty in China fall into this category of makryo. The records of the Chosun Dynasty also indicate the existence of such men as well. The problem today are the government ministers in Korea.
The deputy prime minister of economy created a tax bomb to control housing market policies, even sacrificing his principles. The Government Information Agency disseminates lopsided information about a constitutional amendment.
They stepped beyond their mandate as civil servants and into a place behind the curtain for their supreme appointer. If they cannot do what they should do, they should do nothing.