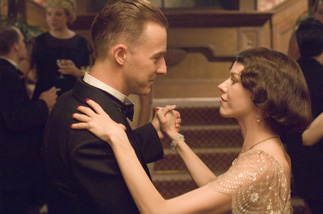 Hollywood has come a long way since “Casablanca,” the classic tale of love lost abroad, set in North Africa ― but filmed entirely on the Warner Brothers backlot in California.
“The Painted Veil” is another bittersweet expatriate love story ― but its greatest asset is its location, not some air-conditioned sound stage or suburban Hollywood hillside, but picturesque Guangxi province in southern China.
In the film’s loveliest scenes, a river recedes into green-tipped mountains, protruding from misty rice paddies like fingers reaching for the setting sun. The many long outdoor shots are like traditional ink paintings come to vivid life, while the meticulous period costumes and construction transport the viewer seamlessly back into the rural China of 1925.
To the disquieting sound of Satie’s “Gnossienne,” Dr. Walter Fane (Edward Norton) convinces Kitty (Naomi Watts), a London socialite, to marry him and move to Shanghai, where he runs a bacteriological laboratory. She agrees, only to escape her overbearing mother, and finding little in common with her new husband, she soon begins an affair with a local vice consul (Liev Schreiber). When the doctor discovers it, he gives Kitty two choices: accompany him to a country town to treat a cholera epidemic or face divorce.
Eventually, Kitty learns to love her stoic but selfless husband, and Walter learns to forgive her. But this is very much a story about Kitty learning to cure her selfishness, taking advice from the mother superior of the local French nunnery (Diana Rigg). (One hopes the real-life relationship between Watts and Norton is not in such a state.)
The story of Fane fighting the epidemic reflects the conditions of China at that time with startling accuracy. When he orders the local Nationalist commander (Anthony Wong Chau-Sang) to close off the well and river, the people curse the foreign devil. When he urges people not to keep corpses in their homes or bury the dead near the river, he faces the religious indignation of family members who, following tradition, follow the corpses pleading desperately that their ancestors’ spirits will not be able to rest.
But the film always maintains respect for the natives of its setting, even if Kitty sometimes does not. In fact the only really malicious people in the film are the vice consul and his co-conspirators, along with perhaps the local Chinese warlord. That this film, which portrays the Nationalists in a very positive light, was filmed in Red China is a promising sign of freedom ― even if Chinese writers and filmmakers who dare to doubt the regime are still censured.
Norton and Watts are no Bogart and Bergman, and this story, penned by Ron Nyswaner based on a novel by W. Somerset Maugham, dips heavily into pulp melodrama. The sole fully developed character is Watts’ ― the others, even her husband, whom Norton plays with his typical unmoving stone face, really serve only as static devices.
Still, a production of this sheer beauty, with good intentions, stately cinematography, detailed costuming and an excellent, evocative score by Alexandre Desplat, must always be a pleasant experience.