‘Reconstructing a Masterpiece’ is Da Vinci with a twist

‘Reconstructing a Masterpiece’ is Da Vinci with a twist 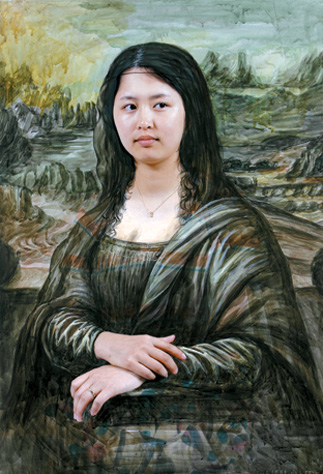 They say that Van Gogh hated Millet’s depictions of peasant farmers, which is one key reason farmers constantly appear in his [Van Gogh’s] works. Picasso, at the latter stage of his life, continuously reinterpreted Monet, Cezanne, Velazquez and Delacroix.
In “Reconstructing a Masterpiece,” an exhibition held at Seoul’s Savina Museum in Anguk-dong, northern Seoul, masterpieces of painting, from Leonardo Da Vinci’s “Mona Lisa” to Millet’s “Angelus,” are being reinterpreted and rediscovered by 20 contemporary Korean artists. Forty of their paintings, sculptures and installation art pieces are on display. The exhibition is divided into three sections, each with its own theme. The first, “The Pictures Came to Me and Became Something Else,” includes “Angelus,” “Mona Lisa” and “Venus de Milo.”
In Kwon Yeo-hyeon’s version of “Angelus,” instead of having a man and a woman praying, she inserted pictures of herself and her pupil in the painting, making it appear as if it is depicting a scene from the Korean Thanksgiving, Chuseok. Even though the faces appear too urban for farm life, the background is still a rural area, which conveys the notion of urbanites wanting to be close to nature and natural labor.
Through “Venus de Milo,” Lee Byeong-ho has created a satiric look at plastic surgery. Lee’s statue has turned the classic figure of feminine beauty into a latex figure, with the breasts and hips inflating each time air is blown into openings.
Debby Han criticizes the monolithic approach to education in art academies filled with students preparing for entrance examinations. Her statues of Venus de Milo, Arnulfo Arias and Marcus Vipsanius Agrippa are all made of eraser dust.
The second section, “Masterpieces with Digital Clothes,” features the digital reproduction of classic works.
Lee I-nam, who was introduced at Media City 2006, has recreated Kim Jung-hui’s painting “Sehando” by creating a digital snowfall in his video installation version of the work, renamed “Sin Sehando” (or “New Sehando”). The original painting has a lonely, blue atmosphere that is softened by the snow, making it seem a bit warmer and cozier.
Lim Yong-ho has recreated John Constable’s “The Hay Wain” by making it into a video. In the remake, details emerge from a blank canvas one by one as the viewer gets closer and closer to the piece with a microscope.
The third section, “Studying Masterpieces,” shows works that resemble or add to the original masterpieces. Kim Myeong-suk’s “Millet Study II” resembles Millet’s “Faggot Carriers.” Kim’s piece, though, is drawn with charcoal and crayons. Goh Nam-buk’s recreation used Gustav Klimt’s colors in a modern way by blocking them, almost as a linear band of color. Kim Myeong-jeong turns Mondrian’s architectural color and lines into a humorous work by adding speech bubbles, as if trying to explain the abstractness of Mondrian’s structure.
Hwang Jung-min, curator at Savina Museum said, “This kind of exhibition reflects the current trend in the art world, which is seeing an increase in artists who try to recreate original concepts or works.”
“I would like to advise visitors to pay close attention to what these 20 artists want to recreate, whether in theme or visually,” said the director, Lee Myeong-ok.