Action figures that sit on the shelf

Action figures that sit on the shelf 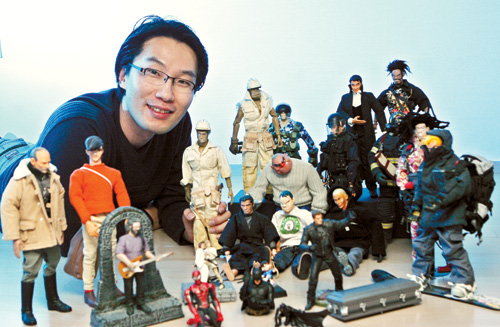 Denny Kim with some of the action figures distributed through his company, Figure Korea. Photo by Ahn Yoon-soo

To any boy who grew up playing with G.I. Joe or Transformers, the office occupied by Denny Kim and his wife in Gyeonggi province is a dream come true. Every surface has is covered with action figures, ranging from Hong Kong movie stars like Andy Lau to comic book characters such as Batman and Spiderman. For Mr. Kim, the father of a nine-year-old girl and the president of Figure Korea, the action figures and ball-jointed dolls he distributes are not just toys. Mr. Kim considers many of them to be works of art.
“Action figures are a replication of human beings or fantasy characters and each one is crafted with great attention to detail,” Mr. Kim said. “Unlike toys sold at E-Mart, which are mass produced in factories, action figures are entirely handmade in small batches of less than 1,000.”
Mr. Kim added that while toys are based on popular television cartoon characters such as the Power Rangers, action figures are created from characters that appeared in movies or comic books. While factories manufacture the same toys repeatedly, action figures are not subject to additional production of identical models and, because numbers are limited, the value is high.
Mr. Kim is also the person who created Korea’s largest online community for aficionados of action figures. Called ifigure, it now has 16,000 members, including Koreans who are living aboard.
Mr. Kim said 80 percent of the members are men and their ages range from 15 to 50, although the majority are in their 20s or 30s. Most of the members are highly paid professionals such as accountants, lawyers and doctors. One of Mr. Kim’s best customers and an active participant in ifigure is a well-known Korean pop singer. Mr. Kim asked that the name of his eminent customer be kept secret, but he did reveal that a pop singer’s income was a useful asset for a collector in the field. “One needs to earn a lot to own action figures,” he said.
Mr. Kim sees many new projects, and one that excites him at present was devised by Hot Toys, a global action figure manufacturing company based in Hong Kong, which is working on making action figures based on the characters Michael Scofield and Lincoln Burrows from the hit U.S. television drama Prison Break.
According to Mr. Kim, some of his members make their own customized 12-inch action figures. He says the list of these fanatics includes some celebrities.
Mr. Kim said he never plays with his dolls, because action figures are fragile and easy to break. He advises the members of his Internet community not to place the action figures where young children can reach them.
Mr. Kim said the figures are generally divided into two categories: 12-inch and 6-inch. The 12-inch action figures command higher prices than 6-inch action figures and far better quality materials are used in making them. The average price of these action figures is 100,000 won ($111). However, 12-inch action figures are frequently retailed at prices above 200,000 won and figures based on Korean characters go for 300,000 won. “There are not many Korean characters in the world of action figures,” Mr. Kim said. “Currently the members of ifigure, including myself, are working on an action figure character for our community.”
The most expensive action figure possessed by a member of ifigure is currently priced at 15 million won. “This man collects really rare action figures, one of which was one of the early pieces made by Michael Lau, a globally renowned maker of action figures. Collecting action figures is actually a good investment, since a person can often double their money when they sell their figures.”
Mr. Kim said one of his members has collected over 100 million won worth of action figures. “If that person needs money at any time he can sell those action figures and solve his cash flow problems.”
Collecting is not the Internet community’s sole activity. Some members who began making action figure as a hobby have become full-time action figure manufacturers. 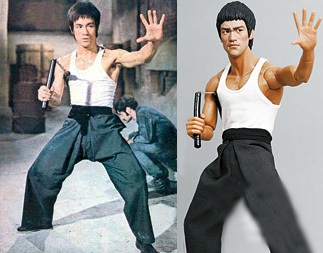 Left: Bruce Lee in his prime. Right: Bruce Lee as an action figure made by a member of ifigure. Provided by Figure Korea

The action figure of famous Korean actor Bae Yong-joon, sold in Japan, was created by Ko Jun, an active member of ifigure. His Jack Sparrow, the lead character in the “Pirates of the Caribbean” movies, sold in five seconds on the community’s Web site. Another member of the community, known as Arnie, is famous for his figure of Bruce Lee. “The head alone was sold for 300,000 won,” Mr. Kim said.
The biggest obstacle in making action figures is the licensing rights, Mr. Kim said. “It takes a long time to get the licensing rights. Ko Jun had to talk to Bae Yong-joon’s agency for a year-and-a-half before winning the right to make the actor’s action figure. Arnie had to persuade Bruce Lee’s wife to give him a license before he could make the Bruce Lee action figure.
Mr. Kim believes that many of ifigure’s members wish to create action figures based on those Korean actors whose popularity is growing worldwide, but entertainment agencies have been reluctant to grant licensing rights.
Mr. Kim said there are some famous action figures that were created without licensing rights, but these are simply traded between community members. “If the creators made their action figures for commercial purposes, that would be against the law. But what we do is an exchange between individuals, which is not illegal.”
Mr. Kim does not make his own customized action figures. “There are people who are born with artistic skills whereas some just don’t have them. I’m one of the latter,” he said, although he does participate in planning new action figures with some of the community members. “We discuss the designs of the outfits that the action figure will wear and the material that will be used.”
Mr. Kim says nowadays he no longer collects action figures. “First they are expensive, and second, I realized that a person selling action figures should not be collecting them, because it is bad for business.” When he is prowling around the world looking for action figures, if he lets himself become a collector he might lack the courage to sell them. He has given up on the desire to have Korea’s biggest collection of action figures and he has sold most of the valuable ones. He has held on to two action figures that are worth 1 million won each. He didn’t have the heart to sell the pieces, which are comical replications of construction workers.
Mr. Kim said he entered the action figure business by accident. “Obviously I grew up playing with toys as a boy. But I learned about the existence of action figures when I was a married man working at a local company. I was on a business trip to the United States when I came across an action figure. When I first saw it, I was immediately drawn to it.”

King Leonidas from the film “300” has become an instant hit among fans of action figures. Provided by the producers


After searching on the Internet he realized that selling the action figures in Korea might work. With the help of his older brother Mr. Kim opened up an online shopping site. “I was still working for the local company, but one day I went onto the Web site and orders had been flooding in and not long after huge money was made.”
Mr. Kim decided to quit his job and started Figure Korea with his wife in 2001. In 2002 he created the online community in the hopes of making action figures more popular. He wanted to share his new found passion with other people.
Mr. Kim said although Koreans are good at making action figures and the number of people appreciating the art has increased over the years, it still remains a small market targeted at hard-core fans. “It isn’t easy making a living by selling action figures. That’s why recently I have been focusing on exporting ball-jointed dolls to the U.S. market.”
Ball-jointed dolls are figures whose every limb and joint moves freely. “Originally the ball-jointed dolls were produced by a Japanese company,” Mr. Kim said. “However, many Korean companies have jumped into the business and made a great success of it.”
Mr. Kim noted that the success of Korean-made ball-jointed dolls owes much to the local skill base. “Koreans are really good at minute details,” Mr. Kim said. “This attention to detail is important for making ball-jointed dolls.”
Early last year Mr. Kim participated in an exhibition of action figures that were owned and created by members. He says there have been numerous requests for further exhibitions, and he hopes that, in the future, the market in Korea will expand greatly.