[Book review]Impending doom will be foretold by designer bags

[Book review]Impending doom will be foretold by designer bags 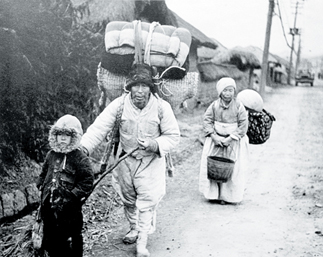 Residents of Seoul fleeing the North Korean army in 1951. The scene could be repeated, according to Jared Diamond’s book. [JoongAng Ilbo]

The art of medicine relies on the science of vital signs. Doctors assess a person’s health with indicators like blood pressure. Societies have the same feature. A nation has vital signs that indicate if it is thriving, or heading for collapse.
By using variables like productivity, crime rates and life expectancy it should be possible to devise something like a survival index to indicate whether a nation, in its current incarnation, has a future.
Thus, history ceases to be an art and becomes a science.
This is precisely what Jared Diamond has been trying to do with his influential books “Guns, Germs and Steel” and “Collapse ― How Societies Choose to Fail or Succeed,” the latter of which is now available in Korea as a paperback.
Diamond, 70, is a professor of geography at the University of California, Los Angeles, although his true speciality is conservation biology. In 1999 he won the National Medal of Science for work he published in “Why is Sex Fun?”
Now that Korea has signed a free trade agreement with the United States it will be radically transformed, for good or ill, and so Diamond’s latest book could not be more timely.
It’s central thesis is that dissolution is a constant feature of history and that societies either move forward, or face rapid and catastrophic collapse.
I take his point. In 1980 I hitchhiked through Europe for three months. In Yugoslavia, as it was then called, I got a lift with an English couple. They took me from Dubrovnik to Sarajevo in their old Bentley. Sarajevo was prosperous and multicultural, the people excited about hosting the 1984 Olympics.
We paused to drink tea on the Mount Igman trail, above the city. It was beautiful. Ten years later I returned, to make a documentary for the BBC and Unicef. The Mount Igman trail, the only route out of the city, had become a killing ground. The city was devastated, shrouded by evil menace.
In a decade Sarajevo’s social structure had been destroyed, and the quintessentially British company that made Bentleys was on the verge of being taken over by Volkswagen.
As Shakespeare put it, “the gorgeous palaces, the solemn temples, the great globe itself, yea, all which it inherit, shall dissolve.”
Seoul has experienced its own dissolution decades. In the 20th century, history hit Korea like a tornado, scattering the existing order like matchwood on several occasions.
In “Collapse” Diamond attempts to gather the elements required to forecast whether a country, or the planet, will fail. In the process he asserts emphatically that developed countries like Korea are in extreme peril.
“Our society is on a non-sustainable course,” Diamond writes. “The prosperity that the First World enjoys is based on spending down its environmental capital.” Calamity, when it comes, will descend with breathtaking speed, he says. “A society’s steep decline may begin only a decade or two after the society reaches its peak in terms of wealth and power.”
So Korea had better be careful. The FTA pushed the main stock index, the Kopsi, to record levels. Imports of luxury goods have never been stronger and now Bentleys, albeit built in Germany, can be seen in Apgujeong. Maybe the key indicator of impending doom is the number of Louis Vuitton bags per capita.
Diamond does not go that far, but his book has many unusual insights. One concerns soil which, he reminds us, like oil or gas, is a resource that took millions of years to accumulate and we are now consuming with abandon. Diamond estimates current global soil loss is at 10 to 40 times the rate of soil formation. We risk running out of dirt, and, hence, most of our food. These are unsustainable trends, especially when associated with current levels of population growth.
Diamond’s ends by saying that consumer-based societies, like Korea, will have to reduce their impact on the world. He then points out that past societies died without the benefit of the interconnectedness we enjoy today. Mayan society could not watch the collapse of the Anasazi on television, but we can see the evisceration of Somalia or Afghanistan, as it happens, on CNN.
“We have the opportunity to learn from the mistakes of distant and past peoples,” Diamond concludes. “That’s an opportunity no past society enjoyed to such a degree.”
In South Korea’s future lies probable unification with the North, further debilitating competition from China and Japan’s technological aggression in key industries. Its rating on any survival index should take account of these issues. As Korea faces these challenges, Diamond’s “Collapse” could prove instructive. Read and profit ― or, at least, survive.

Collapse - How Societies Choose to Fail or Succeed