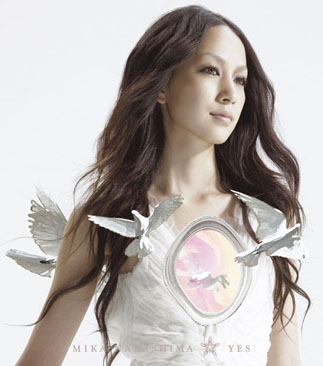 Nakashima on the album of “Yes

J-pop superstar Mika Nakashima released her fourth full-length album “Yes” in March after a two-year break. Her voice has captivated audiences worldwide, including in Korea, where she often holds the top spot on the album charts.
In “Yes,” hit singles already featured in dramas, animations and advertisements are included, along with new tracks. The song “Mienai Hoshi (Invisible Star),” which was the theme song to the Japanese television drama “Haken no Hinkaku,” is expected to be a hit to rival her former ballad “Yuki no Hana (Snow Flower).” The first song on the album, “I Love You,” a remake of a song by singer Ozaki Yutaka, was also covered by the Korean group Position five years ago, with much success. Critics have stated that the album showcases a more mature side of the artist, and many claim her United States tour and several sequential singles contributed to this growth. In an e-mail interview with the JoongAng Ilbo, she said, “I concentrated on getting back to my roots while challenging myself to evolve at the same time.”

Q.“I Love You” is a familiar track for Koreans.
A.I loved this song when I was growing up. I still can’t forget the emotions I felt while listening to it back then and I felt great singing it. When you hear the intro, it doesn’t feel like a remake. I hope this song is embraced by the Korean public. 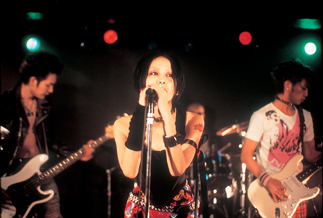 In a still from the movie “Nana.” [JoongAng Ilbo]

Why do you think so many of your songs, including “Yuki no Hana,” are covered by Korean musicians?
A great melody is just as important as lyrics and it transcends borders. When I hear cover songs by Korean artists [of my songs] I feel the same emotions I did when I sang it.

It feels like you have gone back to your original style on this album.
I tried to remember my earlier years and tried to stay away from my most recent album, “Nana” [a soundtrack of the movie “Nana” starring Nakashima, which was a remake of the Japanese manga of the same title]. Even when taking photographs for the album cover, I tried to convey an image of openness and freedom, just like the songs, by wearing long hair, colored contact lenses and a white dress.

What does the album title “Yes” mean?
Up until now, if I didn’t feel strongly about something or know it fully, I would always say, “No.” However, I started to believe in the eminent possibilities inside things I have not done or experienced. So I named the album “Yes” in the hopes that I would be more open to challenges. I don’t think I’ve ever had a stronger concept in any album I have released.

In tracks like “Sunao na Mama (The State of Honesty)” and “Joy,” a friendly, lovable Mika appears.
“Sunao na Mama” was quite the challenge. If it were up to the former me, I would have never had the courage to sing this kind of song. Ryoji, who wrote the song, coached me on the vocals, and I was able to bring my own flavor to it. “Joy” is a simple, three-beat song, which is hard to find these days. Personally, it is one of my favorites.

What do you do when you are not involved in music?
I usually read. I also like to watch DVDs, and recently I am immersed in the American drama “CSI.” I am also painting the inside of my house all white, which I am quite involved in at the moment. It feels refreshing to paint.

Last year, you went to New Orleans. How has that experience influenced your music and life?
I realized so many things after seeing the victims of the hurricane; [they] have lost so much but still remain hopeful and positive. I was humbled as I walked through the remains of left in the disaster’s wake. My passion for music has also gotten stronger. In the past, the thing that was most important was to sing with joy, but now, I feel I have to sing for someone.

You seem to have something you want to say in “What a Wonderful World.”
I sang that song wishing that the world everyone is hoping for will come true. I hope people really listen to this song during times like these, when the Earth is becoming more and more of a dangerous place to live.