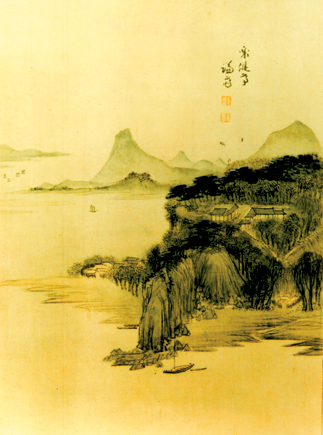 18th in the series Landscape painting

On most days, the plaza in front of Seoul City Hall looks quite serene, with freshly-cut grass and benches. However, there are days when demonstrators descend. Then it can become a battleground and any hint of quietude disappears, to be replaced with fear and anxiety.
There have always been times when our greatest fears were manifested in other human beings. Last week’s massacre at Virginia Tech suggests that will always be the case. Fear of nature, on the other hand, has been subdued over time, through civilization. However, in times past, nature was regarded as a malevolent force that posed countless threats to vulnerable human beings.
Before the Joseon Dynasty (1392-1910), the word sansu, meaning landscape, (san means mountain and su means water) was used in China and Korea to represent a vast question mark and fear of the unknown.
In “Shijing,” the oldest songbook in China, there are many threatening images of sansu, include the fearsome collapse of a mountain.
The earliest forms of Asian art, wall paintings, included many images of animals and humans, but landscapes were not regarded as a suitable subject.
In Korea, it was only later, during the Joseon Dynasty, that civilization had developed enough to allow artists to depict nature as a benign force. Until then sansu was synonymous with a sense of anxiety and foreboding. However, once landscape painting took hold, it became a dominant art form. It just took time.
From its inception, sansuhwa, or Korean landscape painting, was heavily influenced by Chinese landscape painting.
During the Han Dynasty (202 B.C.-A.D. 220) in China, images from nature started appearing in ornaments and wall paintings, including cone-shaped lines that signified mountain peaks.
In Korea, murals started to include scenes from nature during the Three Kingdoms era (early 4th century to mid 7th century). In paintings of men riding horses or hunting, curvy lines, meant to portray mountains and rivers, gradually began to show up. 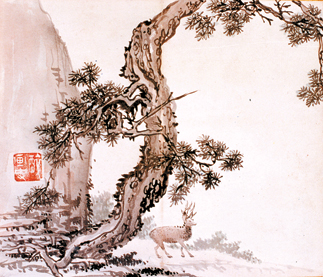 However, nature was an insignificant part of these murals, as the animals and humans were much bigger than the mountains. The landscape was little more than an embellishment of a bigger theme, one in which man dwarfed nature.
One of the first paintings to have nature as its subject is “Sansumunjeon,” from the 7th century. It depicts a stone with round mountain peaks, one on top of the other.
The early Joseon Dynasty saw the rapid development of landscape painting, through the work of court artist An Gyeon. He was a favorite of Prince Anpyeong, who requested many paintings by him, both landscapes and portraits. The landscape painting during this time represented chungsanbaekun, blue mountains and white clouds, the four seasons (these paintings were called sasido) or dreams.
“Both the east and the west started with figural paintings,” said Lee Soo-mee, a researcher in the traditional paintings department at the National Museum of Korea.
While landscapes were becoming a big part of Korean art, in the West religion and nobility became more important subjects.
“In the West, interest in landscapes came later,” said Lee. “Especially during the Renaissance period. But almost 70 percent of Korea is mountains. Nature was a part of life, and featured in our literature and art.”
One of the most important landscape paintings from this era is “Mongyudowondo,” or “a dream of the peach blossom land.”
It was inspired by “Dohwawongi,” a book written by the Chinese poet Tao Qian, in which a fisherman follows a peach blossom floating in a river as he searches for a peaceful, utopian village. Once he finds it, the fisherman decides not to tell anyone about the village, but word gets out. However, when people try to find this mysterious place, it is nowhere to be found. The painting was commissioned by Prince Anpyeong and drawn on a silk scroll (38.7, 106.5 cm), with bold brush strokes and poetic imagery. Its existence demonstrates the strong relationship between a patron and the court painters of the era. It also signifies the interest that Joseon Dynasty artists and scholars had in Chinese literary works.
Sung Confucianism, which emphasized a spiritual outlook on life and strict control of worldly urges, played a central role in the philosophy of the mid-Joseon Dynasty. During this era, romantic idealism, portrayed by chungsanbaekun paintings or sasido, disappeared to make way for a more powerful representation of nature that showed its dark and twisted side. By doing this, the cultural elite sought to portray nature as a dominant element, stronger than their own lives or the people around them.
The 17th century also saw a rise in landscape paintings with figural elements, especially people. Lee Gyeong-yun was the forerunner of this movement. In “Gosa Takjokdo,” Lee features a scholar sitting at the edge of the river, dipping his feet in the water while a servant serves him tea.
Other paintings, including ones by Lee Heung-hyo and Lee Jung, show men either fishing or sailing a boat. The fishermen were thought to symbolize a contemplative approach to life, in which men transcend, or aim to transcend, worldly matters. 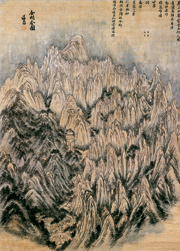 Another category of painting was giryeodo, paintings in which a scholar rides a donkey over a steep mountain. In many paintings, the donkey looks like it is about to fall off the mountainside, while the scholar gazes onward, without much expression on his face. This pose is seen by critics as another example of the mid-Joseon scholar and his detachment from the world.
When it comes to landscape painting most Koreans think of jingyeong (true-view) sansuhwa, in which the topography of famous Korean places, especially Mount Kumgang, appears.
Some people see this movement as nationalistic in its attempts to escape Chinese influence and capture Korea’s essence, but most critics see it as a natural development into a more realistic style of painting, one which reflects the actual places that painters have visited, instead of the romantic, dream-like landscapes of the past.
Jung Sun (1676-1759), who began with pieces that were influenced by the southern Chinese school of painting, is often thought of as the master of jingyeong sansuhwa.
In his thirties, he began to travel across the country in search of famous Buddhist temples. He uses strong contrasts in color and composition to show the Korean landscape on a grand scale ― both magnificent and threatening at the same time.
“His brush strokes were grand and powerful, while Kim Hong-do’s [another landscape painter mentioned below] was quite romantic and lyrical,” said Lee.
Jung Sun had a lasting influence on 18th century landscape painting, with artists such as Kim Yun-gyeom, Shin Sa-jung and Jung Hwang following in his footsteps.
Kim Hong-do (born in 1745) was a master landscape painter of the late Joseon Dynasty. While Kim was also a premier genre painter, his later career involved mostly landscapes featuring Kumgang Mountain and the like. Compared to Jung Sun, Kim’s paintings are more realistic.
“His landscapes are my favorite. They influenced me,” said Kim Ah-young, an artist who represents the new generation of Korean landscape painters. She will have 20 works on display at the Noh Gallery in Gwanhun-dong, northern Seoul from Wednesday to May 5. They have intricate observations of Korea’s four seasons.
Perhaps one of the most adventurous interpreters of Korean landscape painting was Kang Se-hwang (1712-1791), who was also an art critic. He once criticized Jung Sun’s landscape paintings for being repetitive, while praising Kim Hong-do’s depiction of Kumgang Mountain. He started incorporating Western techniques such as watercolor shading into his work. 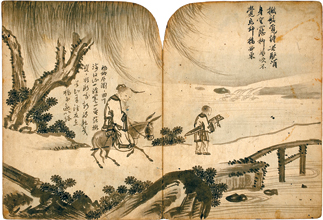 Landscape painting, like all other genres, has changed to fit the times.
Kim Ah-young’s painting, “The Blooming of a Japanese Apricot Tree,” which will be included in her Noh Gallery exhibition, features the aforementioned tree executed in minimalist splashes of yellow, white, grey and black. It looks modern and traditional, like a painting influenced by both Monet and Kim Hong-do. “I try to give my paintings modernity while employing the traditional materials used in Korean landscape paintings,” she said. “I don’t use acrylic, for example. I do not want my paintings to be like fusion food.”
As to the future of landscape painting, time will tell. “The landscape, and nature, is not a big part of our lives anymore,” said Lee . “In the Joseon Dynasty, nature was a part of us, instead of an environment we live in. It was an intimate part of people’s lives.”