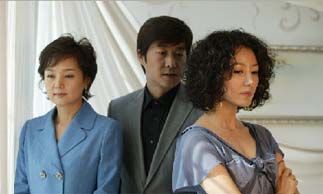 A scene from “The Woman of my Man,” a show written by Kim Su-hyun. [SBS-TV]

TV dramas are powerful creatures that can enslave viewers. Unlike a film that ends after two hours, a good TV drama can change your lifestyle by tying you up for an hour every week for several months. Knowing what kind of TV drama or series is popular in a given country can be an effective glimpse inside its psyche. The stature of certain script writers is also a good indicator of a society’s direction.
Take a popular writer like Kim Su-hyun, whose most recent work, “The Woman of My Man” debuted on SBS-TV earlier this month and now airs on Mondays and Tuesdays at 10 p.m.
As a lover of dramas, I grew up enjoying Kim’s work. When I was in my early teens, it was a weekend ritual for members of my family to watch “What on Earth is Love?” a comedy about a large patriarchal family. The show was funny and action-packed without a hint of criticism of the patriarchal system, and it was a phenomenal hit in the early 1990s.
Kim kept on producing successful dramas and by the time I had developed a crush on my English teacher in my mid-teens, her big hit was “The Trap of Youth,” about a woman’s revenge against a man who left her to struggle in endless misery after he falls for a rich woman.
I still remember my mother and I watching the drama, eating apples and cookies. The drama had the legendary line, “I will smash you,” the oath of the wronged woman swearing revenge against her faithless lover.
Kim is also regarded as a scriptwriter who is worshiped by actors. I am flabbergasted when I hear they line up to greet Kim with gifts on national holidays, but she is, after all, a writer who sells. Other than the two dramas I mentioned, she has a long list of hits. Actors who have worked with Kim are united in their praise of her.
Given her power I was not surprised to learn that Kim never forgives an actor who changes even one word of her scripts. She writes well and knows how to please her viewers. Plus, her refined choice of words deserves respect.
Still, her latest work left a bitter aftertaste, and I thought I could sense a writer who had reached her limit.
First, the characters in the drama are cliched. In a tried-and-trusted story about an extramarital affair, Kim features a submissive middle-aged woman whose husband is snatched by her best friend, who is a distillation of all the elements of a bad woman.
Watching, I could feel Kim’s omnipresence because it was obvious that the actors were trying hard to follow her directions. They were trapped in the characters she created. I mean, they were dying to meet Kim’s demands, and they come across looking like her puppets. I could feel her invisible hand everywhere.
Another disappointment came from the stale cliches and stereotypes. An example is the scene when the housewife’s sister finds the bad woman character, and hits her hard in the head. Watching a five-minute-long fight sequence between the two women, I was, well, rather bored and annoyed by the noise of screaming and fighting.
The last line of the sequence awed me. The bad woman character (who had just come back from the United States) said, “I knew I would be hit like this. This is Korea, not the U.S.”
Wait a minute. Does Kim think that all the Americans are so cool-headed that their extramarital affairs don’t end up in physical scuffles? Does she think Americans are not human but alien? What a shortsighted, juvenile stereotype.
Yet, her drama is again being well received despite my criticism. After airing four episodes in two weeks, “The Woman of my Man” scored the highest audience rating among rival dramas of the same time slot. Maybe I’ll keep watching for the fun of disparagement.