For half a billion,Spidey 3 lacks bite

For half a billion,Spidey 3 lacks bite 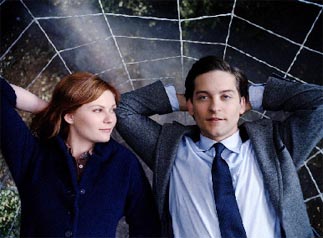 The duo of Tobey Maguire and Kirsten Dunst is still endearing, but the third Spider-Man flick is weighed down by too many distractions.

What’s that sound of webs being slung and cash registers being rung? It’s “Spider-Man 3,” of course, first out of the gate in this year’s crop of blockbuster goliaths that emerge every summer to wow our eyeballs with special effects and knead our brains with comic-book melodrama.
But this time the web-slinger isn’t just the first, he’s also the most expensive, perhaps ever. If the unofficial figures being bandied about in the Hollywood press are true, Sony Pictures has stuffed Spidey’s spandex with upward of $350 million in production costs, which would make “Spider-Man 3” the most expensive film ever made, topping the inflation-adjusted $290 million spent on “Cleopatra.” Add in marketing costs and Sony’s easily going to end up spending more than half a billion dollars on this flick.
Of course, the franchise has saved the studio in the past, setting records and raking in more than $1.6 billion at the box office worldwide, so it seems like a sure bet, especially with all the key stars and director Sam Raimi returning for what may supposedly be their last outing.
On the other hand, the first sequel did underperform relative to its startling predecessor, and the competition is a lot stiffer this time around, with “Shrek the Third” and “Pirates of the Caribbean: At World’s End” waiting a few weeks from now to gobble up Spidey’s repeat business. For this gamble to pay off, the web-slinger has to put on one spectacular finale.
Unfortunately, this isn’t it. Though “Spider-Man 3” is certainly dazzling, it doesn’t measure up to its predecessors, much less look like the priciest film ever made ― and like so many movies that spiral wildly over budget, it suffers from a scattered, contrived story that grows less, not more, involving as the film blasts and swings and punches its way to the end of its 140-minute run time.
The third outing offers not one, not two, but three Spidey villains ― the Green Goblin, in the form of Peter Parker’s friend Harry (James Franco) out for revenge; Venom, an alien symbiote that takes over Spidey and amplifies his aggressive tendencies; and the Sandman (Thomas Haden Church), who is, unsurprisingly, a man made out of sand.
And here’s where the march of implausible coincidences begins. It turns out Sandman was a regular ex-con who also happens to be the actual killer of Peter’s uncle, until he just happened to fall into some sort of open-air particle accelerator. And it just so happens that the alien symbiote falls off Spider-Man and onto Eddie Brock (Topher Grace), a competitor for Peter Parker’s job who just happened to be walking by. Of course, these two then just happen to meet up. At some point one must stop forgiving this kind of lazy storytelling and start rolling one’s eyes.
The best part of this third film was also the best part of the first: the old trio of Tobey Maguire, Kirsten Dunst and Franco, backed up by Rosemary Harris as Peter’s Aunt May. Maguire as the web-slinger is still just as delightfully geeky as he was in the first film, and when the symbiote turns Spidey into a “player,” Maguire and Raimi create a montage of Peter Parker trying to go hip that is easily the best few minutes of the film. (They probably didn’t cost much, either.) A wacky cameo by Bruce Campbell (the cult hero of Raimi’s “Evil Dead” films) as a questionably French maitre d' is another highlight.
Spider-Man swinging through the skyscrapers is still thrilling, but it lacks the novelty it once had, and these set pieces don’t bring much new to the table.
Ultimately, “Spider-Man 3” is just too much like a comic book ― and not the Alan Moore/Will Eisner/Neil Gaiman kind, but the kind you spent your whole allowance on in fourth grade and then ended up selling for pennies on eBay.
The first “Spider-Man” succeeded because it broke out of the young and/or pimpled crowd, making comic book movies financially viable again and turning comic book conventions into big-money Hollywood events. We suspended disbelief past the genetically enhanced spider bite because of Maguire’s charms, his supporting cast and the movie’s earnest, focused message.
“Spider-Man 3” is simply too silly, too long and too rehearsed to keep up this standard. A news reporter even utters the line, “Could this be the end of Spider-Man?”
I fear so.