Left: Audience members at the Jeonju International Film Festival. From Left: “Off Road” “Edvard Munch,” and “The Small Town,” all shown at the festival. Provided by the organizers

Firat Yucel, a critic and film magazine editor from Turkey, uses the word “hybrid” to describe the dynamics of recent Turkish cinema. Sitting with the JoongAng Daily on Thursday in Jeonju, Yucel, 28, said that Turkish films are being produced in many different genres. Last year was especially memorable, Yucel said, in that homemade films accounted for 60 percent of the Turkish market.
But it would be wrong to say that the Turkish film industry has always been healthy. The 1980s, for example, represent a “missing decade” Yucel thinks this is connected to the military coup in 1980.
Another important key to Turkish cinema, Yucel explained, is the country’s multicultural history. Turkey has tried to integrate minorities, including the Kurds, who have been seeking independence. “It’s still taboo to challenge the idea of integration,” Yucel said. “A phrase such as a ‘war between the Turks and Kurds’ is a taboo expression, because, to the government, the Kurds should be a part of Turkey.” Still, Turkish directors have produced films about the Kurds, including “Journey to the Sun” (1999) by Yesim Ustaoglu, which was presented in Jeonju this year.
“Turkey was established by the integration of Asians and Arabians,” Yucel said. “So the government tried to find one single national identity by seeking westernization.” For example, women were not required to follow the Islamic tradition of covering their head with a scarf. “They think that, by removing the Islamic tradition, they democratized and unified the country,” Yucel said, “But it’s still controversial, because it’s more democratic to give a woman a choice whether or not to wear a scarf.” 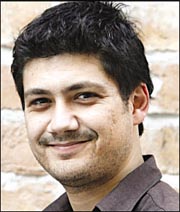 Yucel believes that Korea and Turkey have common traits because both have suffered turbulent times in the course of modernization. His interest in Korea started with Korean films, and his love of some Korean directors. Park Chan-wook of “Oldboy,” took Yucel to Jeonju, his first time in Asia. His monthly film magazine, Altyazi, held a special retrospective on Korean films recently and he said “The Host” by Bong Joon-ho drew his attention, because it offered a chance to look into aspects of Korean society, such as family culture.
Regarding the surge of home-made films both in Turkey and Korea, Yucel said, “I guess people now want to see their own culture, their own jokes and their own selves on screen,” he said.