Is there a Guggenheim here?

Is there a Guggenheim here? 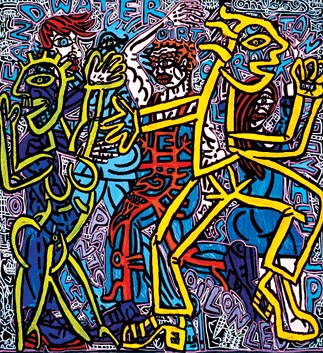 A painting by Robert Combas exhibited at KIAF. Provided by the organizer

In a country where art fairs were once limited to a few collectors and wealthy wives, the Korea International Art Fair has achieved miraculous success over the past few years, catching the eye of a general public who usually steer clear of pricey galleries.
Over the past six years KIAF’s organizers have managed to expand the range of its customers. And it has brought together important work by young, emerging Korean artists seeking some international exposure.
As in previous years, one of the event’s highlights was the fair’s “guest nation.” This year KIAF invited 14 galleries from Spain. In previous years the guest nations have been China, Germany and France.
Tony Berini, the Spanish curator, has put together an exhibit titled “New Contemporary Art from Spain: A Proposal” in which the works of emerging Spanish artists are displayed. There is also a special screening of Spanish arthouse films.
In other sections of the fair visitors can find “Something Mr. C Can’t Have,” an exhibit of young Korean artists; “Kiaf Finds Hidden Treasures,” a program in which artists get to present their portfolios to directors and industry experts; and lectures about pricing in the art market.
There is plenty of art to see. The fair features up to 5,000 works this year, including digital drawings by Paik Nam-june and works from Gerhard Richter and Damien Hirst who are considered to be among the “certified” stars of the industry in terms of the commercial value of their artworks.
In “Shooting Hidden Spot,” the fair also commissioned Korean photographers to shoot pictures of the fair site with innovative angles.
The participating photographers include Kim Hyun-chul, a media artist who presents black and white still images and sequence photographs that focused on the audience’s emotional response to the art on display; Cally Iden, an American artist, has turned a metal food carrier, used by the local delivery boys from Chinese restaurants, into a pinhole camera to take extended exposure pictures around the exhibition site.
There are plenty of signs that say the fair wants a big audience.
One example is Lunch@Kiaf, a session that’s aimed at discovering the Guggenheims of tomorrow among ordinary office workers. During the program, the participants are provided with lunch and a series of lectures by art critics on the issues that ingenue collectors face when they enter the art market. The program costs 25,000 won ($27.50).