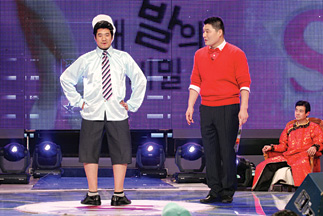 The guard in my apartment building has had some incredible adventures. It is a pity I did not become aware of them until I discovered that he was leaving. A retired banker, this elderly gentleman has great stories about his past seven decades in this country, including his brush with an enemy combatant, whom he claimed was a North Korean spy, during his military service in Gangwon Province.
Our encounters usually lasted for a few fleeting seconds, until I heard him remark, “Today is my last day, by the way.”
Hearing this, I forgot the purpose of my visit to his tiny office was to pay my utility bills, and we started to talk. That conversation was our longest and our last. I began to regret the reciprocal frowns I had given him whenever he tossed a judgmental look my way, after yet another box arrived from my favorite Internet shopping malls. His stories are highly unlikely to make it to the front pages of newspapers, yet they were good enough for a great talk over a cup of coffee or two. It’s a small miracle to discover that almost every human being has a deep well of interesting stories.
After all, good stories are not just a matter of battles between the two Grand National Party presidential candidates or hotshot celebrities having extramarital affairs. This is why I cherish the SBS-TV show “Star King,” which airs every Saturday afternoon at 5:30 p.m. It’s a show that’s truly of the people, for the people and by the people. It allows plebians a chance to tell their stories and reveal the fun, and sometimes weird gigs they have.
Since its debut earlier this year, the show has featured a rich vein of commoners who have revealed some outlandish talents. An impressive example was a gang of ladies in their 70s with a talent for smashing roof tiles with their bare hands. In another episode, a young man demonstrated that he can rotate the bones of his feet in any direction.
Last week, there was a man who can read two pages of text in 30 seconds and a prim-and-proper looking young lady who soon broke free of her conservative image by presenting a series of weird dance moves. The most formidable guest was a teenage rhythmic gymnast who displayed the ultimate in bodily flexibility.
With Gang Ho-dong acting as master of ceremonies, a group of celebrities decide which featured guests will be the winner of a 2 million-won ($2,160) cash prize. The female dancer tried to persuade the judges to give her the prize, saying that she wanted to take her mother on a trip abroad, as consolation for the loss of her father last year. But her moves were not as impressive as that of the gymnast, who said she would invest her prize money in training to win a gold medal in the 2012 Olympic games.
Despite the format, this is not a Korean version of the “American Idol” series, as the challengers appear in order to enjoy displaying the variety of talents they have. Plus, they are not doing it because they are desperate for stardom. Drinking water with one’s legs around one’s neck is not likely to make somebody a star. They just enjoyed their moments in the spotlight, like the good old children’s song, “I Wish I were on television.”
Such a harmless and funny talent show is much more pleasant to watch than the dirty mudslinging games played by the politicians jostling for the Blue House. One of these ambitious, greedy politicos will become the next occupant of the Blue House for the next five years, but it’s these commoners with their quirky talents who represent the backbone of the country.
By the way, I have a new guard at my apartment building, another gentleman in his 70s. He probably has a lot of fun stories to tell, but let me dig into them after we finish our war of words over how to deal with recyclable plastic garbage.