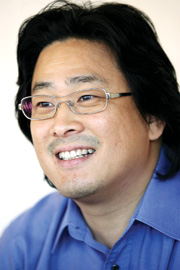 Park Chan-wook, the celebrity director of “Oldboy,” is soon to make a film in New York, along with a dozen or so other directors from a variety of countries. It will be called “New York, Je T’Aime” (New York, I Love You). Park agreed to the project after receiving an offer from the film’s producer, Emmanuel Benbihy.
The film is a sequel to the 2006 omnibus, “Paris, Je T’Aime,” where acclaimed directors like Gus Van Sant and the Coen brothers worked to make an collection of short films using the theme of love and city lights.
For the New York sequel, the producer has gathered a stellar list of directors, many of them darlings of the international film festival circuit. The current line-up includes Mira Nair, who grabbed the Golden Lion at the 2001 Venice with “Monsoon Wedding,” and Wang Xiaoshuai of “Beijing Bicycle,” which won worldwide critical acclaim.
Each director will make a five-minute short, which is to be edited into a 100-minute omnibus. The producer plans to have the film ready this year and to present it at next year’s Cannes International Film Festival.
Park rose to fame with his 2000 film “Joint Security Area” and cemented his reputation with “Oldboy,” “Sympathy for Lady Vengeance” and most recently “I’m a Cyborg, But That’s O.K.,” all of which were warmly received at international festivals.