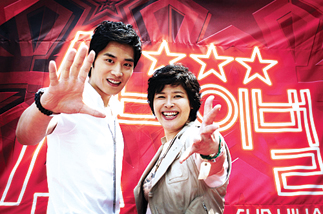 If you can instantly decipher the word “Shovival,” you have lived in Korea long enough. The title of a newly-launched entertainment show, it’s a Korean-style mix of two English words ― “show” and “survival.”
Yet, it’s not the title that caught my attention. It’s the emcee, Lee Young-ja, who is the focus ― the show will decide whether she survives on the pop scene. Lee is making a controversial comeback after being ostracized from mainstream entertainment in 2001 scandal when she was caught telling lies.
In a nutshell, Lee was kicked out after she said she shed many dozens of pounds by just working out at a gym when she actually had liposuction.
The shock was even bigger because she had formerly used being overweight in her comedy, cementing her popularity with the public. I still remember promptly going home after school whenever Lee was supposed to do her gig on a TV comedy show. Using her obesity to her advantage, Lee became the most sought-after comedian of her time.
Yet when she lost weight and lied about how she did it, she evaporated from her comedy kingdom and appeared only in headline news stories about a celebrity who lied and earned public resentment. The truth emerged when her doctor spilled the beans after she did not cooperate in promoting a certain brand of medical equipment.
She was branded an unforgivable liar.
I am not a philanthropist or anything but I felt rather sorry for her. There was an element of meanness in the way the public had a field day turning her into a witch figure.
I mean, people make mistakes, and it was hard to see Lee crying in public, saying, “I just wanted to look like a woman [through the surgery]. I am so sorry.”
Perhaps I am on the same page as MBC-TV’s producers. The mainstream public network was generous enough to give two new shows to Lee, which both debuted last week. One was “Shovival,” airing at 5:40 p.m. Saturdays, and the other is “Jipijigi” at 11 p.m. Thursdays.
Lee was given the emceeing role on both shows. Reliving my time as a teenager looking forward to her gig, I found myself waiting by the TV set for her comeback.
But after carefully reviewing the new shows, I am sadly reminded that she has gone from being funny to being too passe and desperate. I mean, she did not have to force laughter from her audience by saying she has only four toenails on each foot.
In “Shovival,” Lee emceed a competition of dozens of pop star wannabes in a stage performance. All I can remember from the seemingly-endless 60 minutes is that Lee has a very loud voice. She was at least more memorable in the other show, “Jipijigi,” titled after an old Asian saying: “Knowing others and knowing myself are the keys to victory.”
The show has two emcees who have to bring a gang of their friends and hold a quiz show that will reveal things about the other team’s lives.
The show’s concept is already not very inviting, and Lee looked too pathetic to make the most of the show. One question asked the number of shoes that the guests had at home. Question here for the producers: Why should we care in the first place?
Then Lee suddenly brought up the point that she has only four toenails, dumbfounding viewers.
Throughout the show, she kept going too far in her comments and actions, almost collapsing on the stage whenever a guest made a joke (which was not funny anyway). I was left thinking that it must be tough to make a comeback after such a long, unwanted break.
Well, I send all my best wishes for Lee, but there is a very slim chance that I will rush home early to see her two new shows.