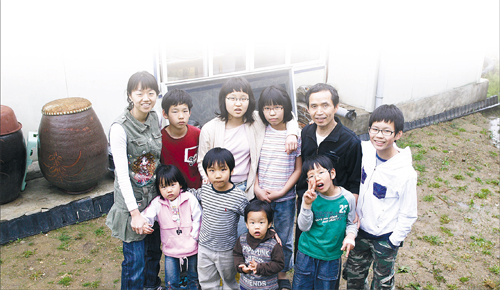 Gwon Hak-do (second from right back row) and his children with Goh Eun-young (far left) in front of Gwon’s house in Jincheon, North Chungcheong. Photo by Women’s Joongang


Goh Eun-young, 33, and several children were squatting while working in a small field next to a church in a remote part of Jincheon, North Chungcheong.
Six days had passed since Goh began living with the pastor, Gwon Hak-do, 66, and his nine children.
“I never thought doing house chores would be this difficult, especially taking care of the husband, nine children and an 84-year-old mother-in-law,” Goh said.
At the same time, Lee Jae-soon, the mother of the nine children, was spending her days living with Goh’s family in Seoul.
“From this experience I realized the importance of family,” Lee said.
The two women switched families for a week, participating in a TV program titled, “Mom Swap.”
The first show aired on the JoongAng Ilbo’s broadcasting station, Q Channel on May 7. The show ran for four weeks with the last episode airing Monday.
According to Q Channel’s press release, the concept of “Mom Swap,” came from the U.S. TV show, “Wife Swap.” The purpose of the show was to present the diversity of Korean families in 2007. The creators hope it will demonstrate the importance of family.
The next show will again switch moms, this time featuring a mom who is physically fit changing places with another mom who is not in shape.
They will trade families for a week. The show is scheduled to air on June 29.
From the week’s experience, Lee said she has learned a valuable lesson. “I learned the important role my children play in my life,” Lee said.
When Lee, who has been married for 17 years, got the call from Q Channel, she thought it would be smooth sailing.
“I thought it was an opportunity for me to take a break from the huge family that I manage,” Lee said. “However, taking care of a young daughter alone wasn’t an easy task. 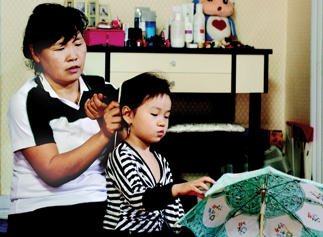 “At home I would let the older children take care of their little brothers and sisters, but here I had to attend to a little girl at all times, and I hardly got a break.”
She also realized how family life in the city has lost traditional family values.
“In the past family meant warmth, consideration for one another and enjoying each other’s company,” Lee said. “This week, I learned that families in the city respect each other’s world. Each and every person has their own thing going on and they rarely interrupt other people’s private space. In the long run I believe such a lifestyle would end up deepening isolation and loneliness.”
She felt especially lonely after sending the seven-year-old child to kindergarten and when Goh’s husband, Jeong Gyu-joon, 37, went to work.
Lee said she didn’t have much time to talk with Jeong since he went to work early in the morning and returned home late at night.
“He once came back home at 3 a.m. He didn’t even call the house telling me he would be late because he was going to drink with his friends.”
Lee said it was a completely different experience from her life, since she spends the entire day with her husband. And at night at the dinner table the entire family had something to talk about.
“I missed having people running around the house,” Lee said. “I was really bored during the day.”
She worried that the lack of conversation within the family would later lead to a breakdown in communication between parents and children, which she believes many families living in the city suffer from.
In an effort to change her host family, Lee suggested having breakfast together every morning before going to work. “Jeong seemed very pleased, and we got to make small talk,” Lee said.
Regarding education, Lee at first was surprised at the enormous amount of study put in by Da-hye, the seven-year-old girl. 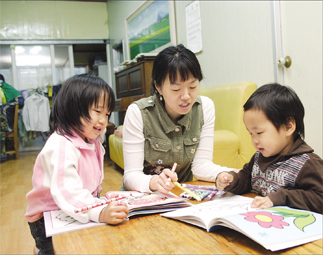 After kindergarten, Da-hye would study piano every day. And once a week Da-hye went to private institutes to study Chinese, English and ballet.
“My children didn’t even go to kindergarten,” Lee said.
She has no desire, however, to change her education method. “I tell my children that family comes first. Getting good grades is important but life isn’t all about getting high scores,” Lee said.
“Although my eldest daughter could be living alone at a school dormitory. I told her that it is more important to eat the food prepared by her parents and to spend time with her brothers and sisters.”
Lee said she was not the only one to learn from this experience. “My husband said he has learned a lot, especially the significant role I play in the family,” Lee said. “He added that the week of filming wasn’t easy, and he hopes never to do another show like this,” Lee added with a laugh.
“I never realized that my wife’s workload was so huge before,” said Gwon.
Lee said it wasn’t her first time living in Seoul. “Before I was married to my husband I worked in Seoul. But coming back after so many years I realized how complicated every thing is,” she said.
Goh, who has been married for eight years, said she had little time to manage such a huge family. In Seoul she would take her time to send her child to kindergarten after her husband left the house for work.
“Here I woke up at 5 a.m. and had to prepare breakfast four times. Additionally, it took me two hours using two washing machines to clean the enormous amount of dirty clothes.”
She said at first the workload was unbearable and there were not enough hours in the day.
“I thought I couldn’t do this all week,” Goh said. However, by the end of the week she became best friends with the eldest daughter, Eun-jin, who is 16 years old.
The other children are Eun-chan, 15; Eun-jeong, 14; Jeong-chan, 12; Young-chan, 11; Kang-chan, 9; Eun-hye, 6; Yae-chan, 3 and Gyeong-chan,2.
Lack of competitive education and self discipline was also a problem.
“Spending a lot of time in nature is what I want my daughter to experience. But it was clear to me that these children had to increase their time in learning other subjects,” Goh said.
During her week’s stay in Jincheon, she helped the children with their homework and taught them how to play the piano.
She also taught the children to take responsibility, including cleaning their own rooms and dirty clothes. The girls no longer mix their dirty clothes with the boys’.

“I really thank Lee for providing the opportunity to eat breakfast with my family,” Jeong said.
“But I am not going to force my wife to change her ways since my wife is doing her best in her own way for the family,” Jeong added.
Although both women live opposite lifestyles in different regions, one thing they have agreed on through the week-long experience is the importance of their families.
“We haven’t been in touch since the last day of filming, but I am not going to stop my children from meeting Goh or her family,” Lee said.