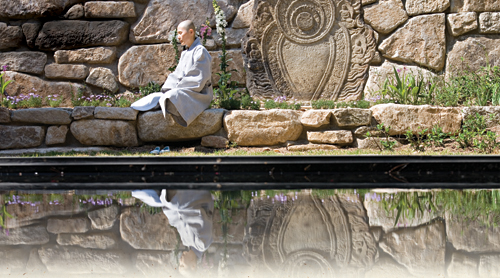 The Venerable Jung Mok meditates in her yard.

Even with the enormity of the tragedy, the Korean and American press showed a bit of empathy toward Seung-hui Cho, the young man who murdered 32 people in a rampage last month at Virginia Tech. Said Venerable Jung Mok, “We can’t completely condemn him because deep inside all of us, a similar fear of the world resides.”
A female monk, Jung Mok is more famous for being Korea’s first monk TV-radio host, as well as being the founder of “The Call of Grace,” a counseling phone line. She also founded a community for female monks called Samsohoe.
She is currently running an Internet Web site called Una, dedicated to meditation (www.una.or.kr). Jung Mok said that through this site, she hopes to help those suffering from depression and teaching them to open up and help themselves.
“Do you sometimes feel like you don’t know yourself, or feel exhausted, or feel like it is a struggle to get through each day?” Jung Mok whispers, “Stop right now, take a step back and focus on the now.” 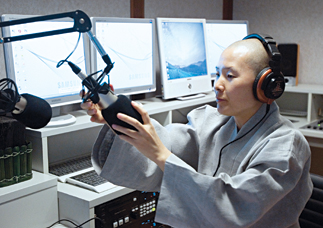 The Venerable Jung Mok at her Internet meditation center. By Kwon Hyouk-jae

At the end of a street with rows of residential houses and villas, a grey building stands with a sliding door in the front. On the door, there is a small sign that reads, “Meditation Museum ― a fated acquaintance.” This house is where Jung Mok set up Una.
“With the help of a lot of different people, I finished it,” Jung Mok said. “At Una, sometimes we meditate, sometimes we study and at other times, we eat with the sun on our shoulders.”
The yard at Una is impressive. The broadcasting studio is in the basement and features an array of equipment.
“Because this is an Internet broadcast, we stopped here [buying equipment],” she said. “Isn’t it fascinating to think that our words and music travel on an invisible path and spreads all over the world?”
Jung Mok is a woman of many talents. She sings, can play a variety of musical instruments, writes and is a good speaker.
Jung Mok’s first initiation into the faith was described by poet Kim Sang-ok: “A smart, articulate girl of 16 who smiled a lot, cut her hair and went into a temple.”
Recalled Jung Mok: “I was so happy that throughout my hair-cutting ceremony, I was giggling. I felt as though I had come home, that I was on my mother’s bosom.”
Jung Mok came from a middle-class family in Seoul. Despite the conventional upbringing, she had lingering questions in her mind, such as, “Why is that a tree and why am I a person?” Or “Why does my heart flutter when I see a flower petal?”
She couldn’t find contentment in the company of friends. Then at age 16, she met Venerable Song Dam in Incheon’s Yonghwa Temple.
“He asked why I came and I answered, ‘Because I can’t find joy in studying and I don’t know why I have to go on living.’ He then said, ‘So you feel suffocated. Who tied you up so that you feel this way?’ And then he laughed.”
Through this chance meeting, she decided to become a monk. She felt that the persistent questions in her mind could be answered in this place.
After leaving home to join the temple, Jung Mok went to Dongguk University and graduated with a degree in religion. At age 26, she became the head monk at Seoul National University Hospital’s Buddhist center.

“I saw life and death unfold in front of my eyes. I crumbled at times, when I saw children who were in such pain that they couldn’t even let out a cry, or children who were abandoned by their parents,” she said. “During times when I felt like I couldn’t handle it any longer, I took a train and headed to Busan. There, I would go up and down the streets and cry.”
For two years, from 1988 to 1990, she worked as a counselor on the hot line “The Call of Life,” in preparation for “The Call of Grace.” During that time, she was busy handling other things as well, including going to graduate school at Chung-Ang University’s social welfare department. Two to three times a week, from 9 p.m. to 6 a.m., Jung Mok worked on the phone. “It was a window into a world I had not known,” she said. “On days when I received depressing, shocking phone calls, I would hold onto the railings on the overpass on my way back home at dawn.”
Through these calls however, she realized her calling as a monk. “As a monk, I believe that I should be a help to the world. We need to walk and coexist with others and face the agony of everyday life with them. It is an honorable thing to go into the depths of the mountains and try to find a spiritual center, but I choose to face the chaos of the world and help people to find their inner peace amid all the noise,” she said.
In May of 1990, she became the host of a radio program focused on the founding of Buddhism called, “The Melodies of a Cup of Tea.” The next year, she hosted a charity program named “A Holy Meeting.” On this program, Jung Mok went to the poorest towns in the country and gave donations to those in need. In 1991, she received an award from the Korean Broadcasting Association, and in 1993, she received another award, this time from the Broadcasting Producer Association of Korea.
Then in 1995, she left broadcasting and for the next 10 years, she concentrated on her inner balance. “I walked around all day and devoted my time to meditating and studying. I also thought about other ways to be a helpful asset to the world,” she said.
In 2000, she opened Tranquil Heart Group, which gathered people from many religious backgrounds and traveled to various places, including India, Tibet, Nepal, Myanmar, China and Japan. Her focus was always “finding a study program that suited the general sentiment of ordinary people in Korea.” After Tranquil Heart Group was finished in December 2005, she returned to broadcasting as host for the program “Music of the Heart.”
“Through my search, I found that inside, everyone is similar,” she said. “Afterwards, I found myself inside the stones, houses and trees, becoming one with them, as if there were no thoughts but only a unified breath going in and out. The world was revolving like that, indifferent to the chaos inside.”
Jung Mok talked about the need to observe and activate one’s spirit during meditation. “The heart is a stage for our senses and emotions to jump around. Our thoughts tend to remain in the past or future and the same goes for our spirits. To find yourself, you need to bring the present into your present,” she said.
She also emphasized the need for quiet thought and keeping life simple.
“Thoughts are not entirely harmful but about 90 percent of them are useless. If we just focus on the now, we think about the past or future less, which in return, gives us contentment,” she said.
In today’s busy world driven by money, does meditation have a place?
“Don’t be overwhelmed by the thought of meditation,” she said. She said concentration is one of the most useful tools we have. “Even when you are eating, if you solely focus on eating, a lot of things will change. For example, the sweetness of the rice will be more apparent and the texture will feel much more real. While eating like this, your concentration on the past and the future might disappear.” Her rice theory expands to a way of life. “The more you concentrate, the fewer useless thoughts will appear in your head. Through this, your spirit will be rejuvenated to encompass a purer, lighter heart,” she said.
She created the Una Web site for this reason ― to spread the joy of meditation to the world. “It doesn’t matter if you are not a Buddhist. Everyone can join the Una family,” she said. “I hope that this Una project can sow a small seed of hope. And after a while, through this small effort, I hope the energy will rub off on other people.”