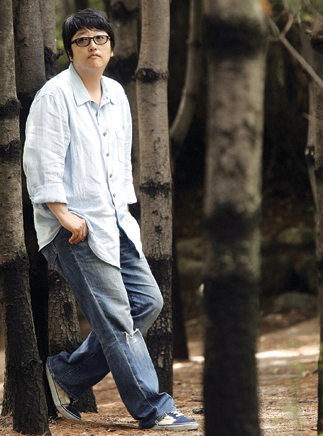 Byun Young-joo was young and confused when strangers gave her warm praise for her film without having seen it.
In 1994 at the age of 27, Byun was fresh out of women’s college with a law degree. That’s when she first shot “The Murmuring,” a feature documentary on Korean women forced by the Japanese army to become sex slaves during World War II.
When released the following year, her documentary helped mark the height of activist filmaking and feminism in Korea, the two civilian movements that were major achievements of the democratic struggles in 1980s Korea.
The response was overwhelming. Every student she met at film venues had heard of her. Yet most of them had not seen her film. In Korea, “The Murmuring” was seen by less than 10,000 people, while it drew more than 200,000 viewers when it opened in Japan.
“All of a sudden I felt like I was becoming Korea’s Ken Loach,” says Byun, referring to a British filmmaker known for producing leftist films. “I was afraid that I would become a political symbol.” 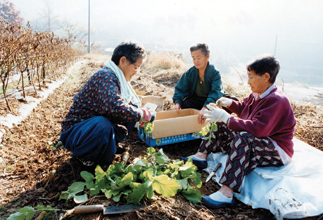 In a scene from part II of the documentary, the women work in a field.

Fast forward to 2007. Byun is director of a three-film series on “comfort women” recently released in a DVD set.
On a recent May morning Byun was clad in loose jeans and a button-down shirt, sipping coffee as she struggled to finish a script for her next film. It is based on a novel by Hideo Okuda about a woman who mysteriously disappears after her boyfriend learns that she was a credit card delinquent.
“I knew there was gossip in film circles that I shot documentaries of comfort women to debut as a commercial director,” she says.
A sense of guilt plagued her when she paid off her debts after years as a documentary director with earnings from two critically panned but commercially viable films, in mainstream Korean cinema.
In an ironic twist, the “comfort women” ended up consoling Byun.
When Byun would have arguments with actors from “Ardor,” her first commercial film, she often went to the House of Sharing, a shelter for former comfort women, and stood outside, seeking solace and warmth.
Byun spent eight years at the house, filming their lives. Then it was time to move on.
“While I was there, I kept reminding the grannies that I was only with them to shoot a film, not to help them out,” she says. “Once the filming was over, I told them they would only see me on Chuseok. I didn’t want them to feel that I betrayed them after I left.”
She still recalls the loss that blocked her ability to work while she filmed the second part of her trilogy, “Habitual Sadness,” in which one of the women, Kang Duk-kyung, suffers from lung cancer and dies near the end of the film.
To this day Byun is touched when she ponders these facts:
? Only four of the 20 victims she interviewed in her three films survive today.
? An official apology still has not been made by the Japanese government since the victims’ first protest in September 1993. 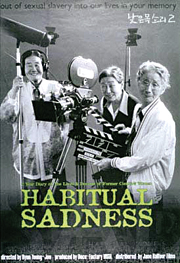 Cover of part II of the DVD set.

? The living witnesses are slowing dying of complications from ovarian illnesses from forced sex with up to 40 men a day and repeatedly injected with chemicals to prevent sexually transmitted diseases.
“I think the main problem is that many Koreans are not interested in the subject,” Byun says. “It’s like any tragic incident of our modern history. We know they existed. We hope it’s not going to happen again. Then we shift our attention away from the subject, thinking it is for people who don’t know about our history. Yet we don’t really know what happened. I think we are so exposed to violence that we are no longer seriously aware of things endangering our lives.”
The idea for the film began in 1993, with a video documentary about sex tourism and international prostitution in Asia that Byun was shooting, called “Being a Woman in Asia.” While filming, she ran into a woman who was working in a brothel on Jeju Island to pay for her mother’s operation for injuries suffered while serving as a sex slave in World War II.
“The Murmuring” starts as an introductory archive of the comfort women. It’s made up of straight narration and hard statistics rolling over a black background, documenting the victims of sexual slavery.
When Byun first approached the women at the House of Sharing to document their testimony, she was met by cold rejection.
By the time Byun found them, the women were exhausted by interviews with reporters and activists from abroad.
The media exposure complicated the victims’ lives, even though it helped to attract international support. In Korea their stories were used as a political defense to reinforce nationalist sentiment against Japan.
Each year on Aug. 15, a flock of reporters came to the House of Sharing to write articles as a reminder of Korea’s struggles followin independence from colonial rule. Byun said the shelter turned into “a haunted house.” The women were sleep-talking and calling for help in their dreams after the reporters left.
“It was a nightmare,” she recalls. “They spent their entire lives trying to forget their memories, but they were constantly reminded of them.”
Their pain and fear made it hard for Byun to shoot freely.
Byun saw the women as brave survivors and living witnesses of hope. But among the political supporters of the comfort women, there was constant pressure to view the women as innocent victims and national heroes who submitted their chastity to Japanese imperialism. That pressure restrained the women when Byun was filming their ordinary lives. The women were extremely careful when the camera approached them.
For the former comfort women, the film was a constant battle of representing and redefining themselves in history. 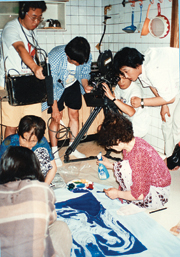 By the second part of the series, however, the women practically lead Byun’s crew. In one scene from “Habitual Sadness,” for example, there is a sequence where two women demand the director film them digging pumpkins and carrying them on their heads to the shelter, saying they want people to see them as “hard-working women” who have endured their horrific past.
By the end of the film, they open up, having learned that their small domestic moments are part of reality, and that the human heart can survive even savage war crimes.
“In a sense I almost see ‘The Murmuring’ as their coming-of-age film,” Byun says. “Through the film, they finally come out in the world. They come to terms with their secret past. The camera gave them a voice. I think that’s the biggest achievement of the films.”
After three documentaries Byun developed eye problems and could no longer stare into the camera for hours on end. That may stop her from filming documentaries in the future, because she thinks the heart of a documentary depends on the angle of a camera.
Looking back, the women she filmed taught Byun about bravery.
In a postscript for the DVD set released last week, Byun wrote: “From these documentaries I hope you can feel the way the grandmothers lived with hope and courage to survive this world, like we did.”


The DVD box set for “The Murmuring” is available in English and Japanese. All profits go to the construction of a “Museum for War and Women,” a project initiated by the Korean Council for the Women Drafted for Military Sexual Slavery by Japan. The box set is 70,000 won ($76). For more information, call (02) 334-3166.