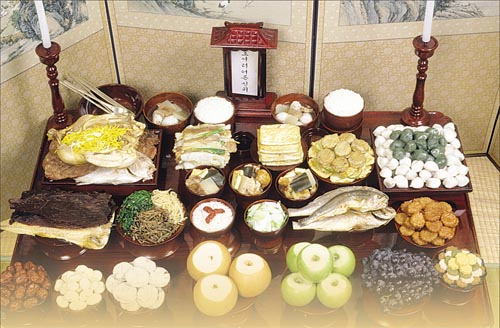 
Even in this century, when new technologies and computers are abundant, many Korean house holds still practice the age-old rituals known as jesa, which show respect for ancestors and their spirits. “Since the dawn of time men have worshiped mystical beings,” writes Professor Jeon Ho-tae of the University of Ulsan in his paper on jesa rituals and ancient religious belief in Korea. “When they formed groups and started to think about using tools was when people begin to dance, sing and perform rituals that worship a divine being.” By the end of the primitive age, men began to hunt animals that they believed had been sent by a divine being. “They strived to talk to the spirits of the animals that they were about to hunt,” wrote Jeon. “They performed spiritual rituals with the bones or the medulla of the animal.”
As men became more civilized and started farming, the rituals developed into the worship of gods and involved sacrificial rituals that offered the blood of animals. According to Jeon, the first signs of orderly rituals worshipping a range of deities can be traced back to the Gojoseon era, when the Dangun legend was born in 2333 BC.
Although Koreans no longer sacrifice cows or sheep or throw virgins into the boiling lava of volcanoes, they still practice some of the old traditions and regard some ancient rituals as having great significance. The jesa of today is far distanced from primitive shamanism and follows many of the traditional
Confucian practices. Jesa are not only performed during national holidays such
as Chuseok (Korean Thanksgiving) or the Lunar New Year, but also throughout the year.
It is still common to see families gathering in the home of an eldest son late at night and pouring jeongjong (traditional distilled alcohol) and bowing in front of a dinner table set up as an altar for the worship of their ancestors.
To many Koreans, even those who practice Christianity, jesa means more than just a family gathering.
“Jesa is an act of cherishing the memory of our ancestors and also a way of returning with gratitude what we have received from them,” writes Lee Young-choon, author of the book “Charye and Jesa.” Lee argues that jesa is an extension of filial piety left unfulfilled during an ancestor’s lifetime, a religious ritual to unite the family and a way of keeping in touch with one’s roots. “Through the ritual we learn our traditions and our character and we create unity and fellowship.”
Although, in the past, there had been numerous jesa performed throughout the year, in 1973 the Korean government, in an effort to reduce excessive spending on rituals and modernize the country, called for major changes in the practice of jesa. One of the main changes was that, instead of worshipping up to four generations back, Korean families today limit their worship to the two previous generations. And some of the broader and larger jesa have been ignored. For example in the past many of the families in Korea practiced a jesa called sasije. This is a jesa that worshiped ancestors from great-great-grandfathers and beyond. This jesa is performed in February, May, August and November, the exact dates being based on the lunar calendar.
This is a jesa that is also considered significant among the nobility of other Asian countries, including China. Today the most common jesa practice, other than those performed on major holidays, is giil jesa, performed on the dates when parents died. Food is prepared for both the father and mother, even if they died on different days. Thus, for both parents, this jesa takes place twice a year.
There might be slight differences in how the rituals are performed in each family. One of the general rules requires preparing a table with red fruits, such as apples, on the east end of the table while white fruits, like pears, are placed on the west end. The same goes for red meat and fish. Red meat should be placed on the west side of the table and the fish on the east. The head of the fish should face east and the tail must point west.
Additionally the rice bowl is to be placed on the west side and the soup bowl on the east. In other words the rice bowl will be on the left hand side when faced by the descendants performing the ritual. This is the opposite position from the rice and soup bowl location for a living person. The spoon and the chopstick should be placed in between the two bowls. The rice and soup bowl for a
male ancestor should be placed on the west side of the table and the female ancestor’s on the east side. 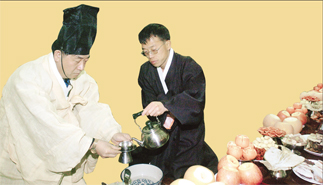 The refined alcohol served during jesa is designed to first raise the spirit of an ancestor and then provide them with a sweet drink. [JoongAng Ilbo]

The ritual starts with gangsin, which is an invitation to the spirits of the ancestors. The invitation is made by lighting incense placed in front of the table while kneeling. The incense is a call for the ancestor, who is supposed to descend from heaven, following the scent.
The family stands in a line behind the eldest son of the family. Then, the person standing next to the eldest son pours liquor into a cup, which the eldest son pours into a bowl called mosa, which is filled with sand that has a red string in it. There are three pauses in the pouring and, afterward, the empty cup is placed on the table. This ritual is to call up an ancestor who might be below ground, using the tasty and sweet smell of liquor.
Some family members take the liquor cup and circle it two-and-a-half times above the incense and then place it next to the rice bowl.
The eldest son then gets up from his knees and, on his own, makes two bows, lowering his entire body to the floor. The next procedure is called chamsin,
which involves prayers by the rest of the family. Every family mem-
ber must participate. Men have to bow down twice while women bow four
times. Today, however, women usually bow as much as the men. According to Lee, the different bows between men and women are not because of sexual discrimination. It is because of the ying and yang principle. Yang is considered 1 and yang is considered 2. Since women are in the path of the ying they have to bow the additional two bows.
Additionally the first bow is because the living follows the path of yang and the second bow is because the dead follows the path of ying.
The third procedure is called jinchan. Here warm foods such as rice and soup are placed on the table. The food comes in a traditionally prescribed order, with meat, soy sauce and noodles arriving first followed by fish, rice cakes and sugar, then soup and rice.
The next step is called choheon, where a liquor drink is offered to the ancestors. The eldest son, after placing the drinks on the table, bows twice and walks back to his place. In between, a written prayer is read out loud. However this ritual is not practiced among many families today, especially those who live in apartment buildings, out of consideration for neighbors. In the next step the
other family members empty the drink by pouring it into an empty bowl. Then the empty cups are placed back on the table.
Aheon is the fifth step during which the second drink is offered. Other then reading the written prayer, the procedure is the same as choheon.
Jonghun is the third offering of drinks. It is the last drink offered during jesa. Anyone can offer the drinks and here, instead of pouring the liquid into the empty bowl, the drinks are placed on the table. Here the cup should be filled up to 70 percent of its capacity.
In yusik descendants offer food to ancestors who have already been offered the sweet liquors. The lid is taken off the rice bowl. A spoon is placed in the middle of the rice bowl with its head facing down and the chopsticks are placed on the food.
In hapmun, except for one person, everyone else leaves the room so the spirit can eat in peace. The men head out to the east and face west while the women do the opposite. Today, most Korean families just wait in silence, lacking the space in their small homes for much moving around. In gyemun the closed doors are opened and tea is served.
The next step is to take away the spoon and the chopsticks and place the lid on the rice bowl. The final step of jesa is saying farewell to the ancestors. This is called sasin. Here every family member bows the same way they did at chamsin. The men bow twice and the women bow four times. The paper that has the name of the ancestor written upon it is then set on fire and, after it has burned away, the entire family sits down to eat.