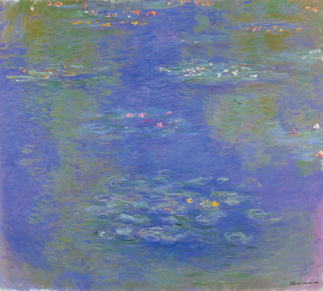 Claude Monet’s name is so overpowering in the history of Western art that it’s hard to develop any perspective on his work that’s new enough to avoid cliche. In writing about Monet, one simply has to admit that his works may have been written about too much already.
But this reservation may only apply to academics and journalists in other countries, who are desperate to find something fresh.
In Korea, where looking at art is heavily laden with notions of luxury and memories of glimpsing famous European works in school textbooks, a Monet exhibition excites genuine curiosity among the local public.
During the Monet exhibit’s opening night last week at the Seoul Museum of Art, a giant crowd of visitors flocked around his “Water Lilies,” which is being shown in Korea for the first time.
The scene was particularly rare for a museum run by the city government, which is known for bureaucratic traditions, formal speeches, handshakes and ribbon-cutting.
Despite the grand scale of the exhibit, “Monet: Painter of Light, From Instant to Eternity” is somewhat of a disappointment. The show is a general overview and lacks an organizing principle strong enough to unite the range of works displayed ― other than the fact that they are all by Monet.
The exhibit lays heavy emphasis on the artist’s early works.
Many are portraits and seascapes done prior to his Impressionist period; all together there are 60 pieces on loan from Musee Marmottan in Paris and other collectors, including eight from the water lily series painted in his own garden at Giverny during his heyday.
Yet, sadly, the show does not adequately reveal the artist’s role as a forerunner of the Impressionist movement, which revolutionized the perception of nature in Western art.
Instead they satisfy the ruthless desire for another blockbuster show ― one has been held at the Seoul Museum of Art every summer for the past few years and the museum has had immense success by featuring major European masters like Picasso, Chagall and Magritte.
The exhibit partly fulfills its purpose by catering to the educational needs of its student audiences.
For example, it displays a wealth of the artist’s photographs along with a textbook chronology that describes the background of Monet’s career.
Perhaps the problem is the lack of a curatorial approach or any effort to understand the artist with an innovative perspective, instead of directly absorbing the words of European curators and pasting them onto museum walls in Korea.
The museum has done this with some of their past shows.
For a retrospective of Picasso last year it organized the exhibit into a show about the artist’s women ― probably to accommodate the lack of significant works from his heyday, rather than to give insights about the way his female muses influenced the artists’ approach.
It’s possible that access to Monet’s works had been limited, considering his worldwide reputation worldwide and the fact that a number of shows highlighting his work are opening at the same time.
But, even with the limited material, the museum could have done more than show a general overview.
Nevertheless the presentation of the exhibit was nicely done.
On the second floor large paintings from the artist’s water lily series are hung next to each other and provide a stark contrast between the artist’s palettes over the 10 years before and after his cataract surgery. And the spacious arrangement of the paintings offers a relaxed viewing experience, which is rare in Korea.