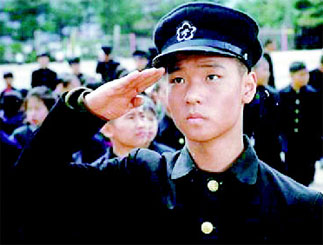 A scene from the film “Our Twisted Hero.” Om Sokdae, the class monitor, salutes. [JoonAng Ilbo]

Although it has been in print since 1987, Yi Munyol’s “Our Twisted Hero” still strikes a chord with readers today for its allegorical depiction of Korea’s struggle for democracy.
The most recent edition, published in 2005, and translated by Kevin O’Rourke, a Catholic priest and professor of English at Kyunghee University, remains so readable that it’s easy to finish its 119 pages in a single sitting.
On the surface, the story recounts the experiences of a middle school boy, Han Pyongt’ae, who moves from his sophisticated school in Seoul to a rural town when his father falls out of favor with his boss and is transferred. Expecting to stand head and shoulders above the other boys thanks to his prior education, Pyongt’ae is in for a rough lesson at the hands of the class monitor, Om Sokdae. Sokdae rules the classroom with a combination of physical intimidation and a system of rewards that his classmates find impossible to resist ― the comparison to military government is obvious.
On his first day at school Sokdae calls on him while his classmates ask where he came from.
“‘Give way there, all of you!’”
“The children were ringed around me asking the sort of questions already mentioned when suddenly a low voice sounded behind them. It was a grown-up voice, sufficiently so for me to wonder if the teacher had come back. The children flinched and stepped back abruptly. I turned around and saw a boy sitting at a desk at the back of the middle of the row; he was solidly planked there and he looked at us with a certain air of resignation.”
This is Sokdae, and he is thoroughly in control. A few years older than his classmates due to a mistake on his family registry, he is clearly the alpha male of the school.
From the start, Pyongt’ae resists Sokdae’s dominance. He refuses to fetch water for the monitor when it is his turn then threatens to call for the teacher’s help when Sokdae tries to force him. This sets the stage for the two to engage in several months of low-scale battle. Rather than openly attacking, Sokdae puts up small walls of resistance that force Pyongt’ae to stumble.
Other boys pick fights with him, he is excluded from conversations and his classmates neglect to mention important social events when he is around, such as when a free movie is being shown.
Rather than get directly involved, Sokdae stays on the sidelines, only intervening to offer Pyongt’ae some relief, as if to say, “If you just give in, I can make life better for you.”
The conflict seemingly comes to a head when Pyongt’ae sees Sokdae take a lighter belonging to the father of a classmate. The boy brought the lighter to school to show it off, and it caught Sokdae’s eye.
After confirming that Sokdae took the lighter, Pyongt’ae goes to the teacher with this and every other accumulated grievance that he can think of. The teacher agrees to investigate, but a former student who was in the room when Pyongt’ae recounts the tale goes to Sokdae and tips him off. Sokdae returns the lighter before the teacher asks about it, and then innocently says he just held it for a while to keep the boy it belonged to from accidentally starting a fire.
The teacher goes farther and invites the other boys to tell him if Sokdae is mistreating them. No one responds. At Pyongt’ae’s urging, he goes farther still and invites written comments from the boys while Sokdae is out of the room. They are all afraid to be seen writing anything, lest the others report them to Sokdae.
Ultimately, his appeal to authority is a failure and the teacher’s inquiry gains Pyongt’ae nothing, although it angers Sokdae and he steps up the process of ostracizing his rival.
This leads to Pyongt’ae’s eventual submission to Sokdae’s order.
Rather than terrible suffering, though, his earlier resistance earns him a higher place than his classmates, and Pyongt’ae enjoys the fruits of Sokdae’s reign, even though he knows it is unjust.
The following year everything changes after a new teacher comes to town and uncovers the deception that has enabled Sokdae’s apparent academic success.
Through a fierce disciplining of the whole class, the teacher breaks Sokdae’s rule and instills a democratic process that governs the rest of the year.
In his depiction of a classroom, Yi paints a complex portrait of Korea’s struggle to leave behind a legacy of dictatorship in favor of democracy.
While this book may not depict actual events, the dynamics at play make it a must read for those wanting to understand Korea’s recent history.