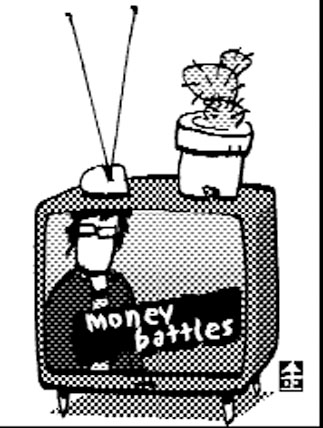 “A man leaves scars but money leaves profit.” This is a quote from the popular SBS TV drama “The War of Money.” The heroine decides to marry a man whom she does not love, in order to pay back her father’s debts. “The War of Money” has realistic descriptions of the underground world of black money loans: the suicide of a businessman from a small enterprise because of expensive private loans, the issuance of hostile loans by personal finance companies and the private loans that snowball in size because of high interest. With the drama attracting a big audience, some viewers want it made into a movie. The people who give private loans have often been described in TV dramas as sharks or Shylocks, but this is the first time that the reality of the private loan industry has been dissected in a Korean TV drama.
As the show’s popularity has increased, celebrities who have appeared in TV commercials for private loans have been criticized for a lack of public responsibility. As criticism intensified, many of them returned the money they had received and stopped doing the commercials. The three major TV channels have decided to discontinue airing TV commercials for private loan companies.
The popularity of “The War of Money” shows that money is the key word of our age. It reflects the fact that many people live and die for money. The box-office hit “Tazza” was similar. Apart from the interesting skills of professional gamblers, the movie gave us stories of people who long for a single shot at winning a fortune in Las Vegas.
The popularity of the drama “The War of Money” demonstrates how private loans have become a social reality for ordinary people. Indeed, there are around 40 TV commercials for private loans being aired at present on both major and cable channels. The Ministry of Finance and Economy reports that there is around 18 trillion won ($19.6 billion) in outstanding private loans and 3.29 million people have such loans. The Bank of Korea also reports that gross household debt exceeded 586 trillion won in the first quarter of 2007, which is an all-time record high.
The title of SBS’s drama is not an exaggeration. Almost everybody in our society is engaged in a war against money, whether they are being chased by private lenders or seeking the dream of instant wealth.
Just as TV stars should be criticized for their attitude when they accept money for commercials that might be socially damaging, so the government should be criticized if they do not help people who are now drowning in debt. After all it is the government which hasdevastated the economy for ordinary people.