[Talk of the town]Coming home?

[Talk of the town]Coming home? 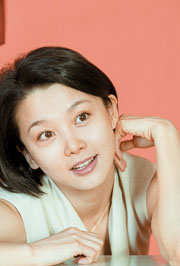 After years of hiding, it’s official. Chun Jae-yong, son of former president Chun Doo Hwan, and TV actress Park Sang-a will marry in Seoul in August. Their road to marriage has been long, as they were bogged down by charges relating to assets of Chun’s father.
In 2004, the court sentenced Chun to serve 30 months in jail on charges of gift tax evasion. He appealed and the court suspended the charges. The former president had been ordered to pay 220.4 billion won ($237 million) on charges of illegally using assets during his regime.
Since 2003, it has been speculated that Park played a role in the hide-and-seek between the Chuns and the prosecutors. Then Park left Korea for Los Angeles, in what appeared to be an effort to dodge public attention. Chun joined her later, and the couple came back last month holding a 15-month-old baby girl, Hye-hoon.
In a media interview last week, the couple denied the speculation and said that they came back because they wanted their daughter to “see her home country.”
“We want to have an ordinary life,” the couple said. Despite their wish they are now living in a far-from-ordinary apartment priced at 2.8 billion won. By Chun Su-jin