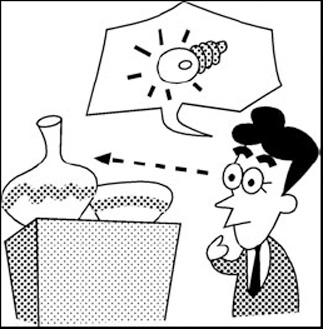 Marketing research indicates consumers are inclined to purchase a product they see first. For some reason, they are drawn to it. First impressions are also important for people. They affect the way a person is perceived. If seen favorably in the beginning, mistakes are overlooked; however, if one negatively interprets someone’s slightest bad behavior, a bad first impression is created.
Cognitive science refers to this as “confirmation bias,” which is a tendency to search for new information that confirms one’s preconceptions and avoid information and interpretations that contradict prior beliefs.
For example, people who believe more accidents occur during the full moon focus on accidents occurring on those nights and disregard other accidents. If this continues, the distorted information that accidents and the full moon are highly correlated becomes more strongly reinforced and it becomes an undeniable fact.
Cornell University professor Thomas Gilovitch reveals, “The most likely reason for the excessive influence of confirmatory information is that it is easier to deal with cognitively.”
Instead of facing up to reality, which contradicts personal views, one clings to the small portion of information that supports one’s position. One easily recalls memories that buttress personal views but conveniently experiences amnesia regarding uncomfortable memories. Confirmation bias also exudes an effect on the memory functions of the brain.
President Roh Moo-hyun is fanatical about his own opinions. Once he fixes his position, he adamantly forces his ideas through, regardless of the resulting calamity. He offers evidence that supports his ideas and attempts to persuade the people; he unconditionally rejects any evidence that conflicts with his ideas ― his real estate policy and countermeasures against the news media being prime examples. He embraces an “I’m right-you’re wrong” attitude and his university admission policies are no different. He disregards opposing views and asserts his own ideas. The president’s confirmation bias grows stronger because of the self-serving and selective information submitted by Blue House aides and civil servants. He went so far as to proceed with an erroneous verification process by sitting down with the presidents of universities for a so-called “debate.” Without offering the presidents any opportunities to respond, he leveled a one-sided diatribe. Afterwards, he firmly believed he had put to rest all opposing arguments. Close to the end of his term, it is unsettling that his confirmation bias symptoms are growing more severe.