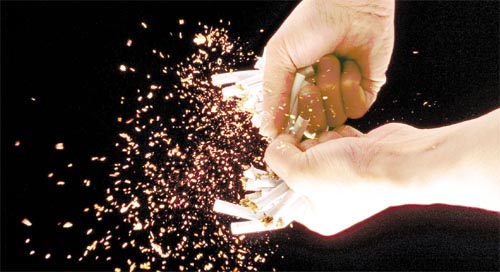 Doctors have long said cigarette smoking is deadly. Now politicians are seeking to make it illegal in many public places. [JoongAng Ilbo]

China has 350 million smokers, more than any other nation in the world. Fighting this overwhelming tide, Zang Yu-ae has been waging a one-man crusade against smoking. After Zang learned that the main factor in his sister’s death from lung cancer in 1988 was second-hand smoke largely from his father’s smoking, he has been pushing for a no-smoking society.
However, Zang’s campaign is seen as too aggressive by many Chinese ― both smokers and non-smokers alike. For example, Zang snatches cigarettes away from anyone who lights up in his vicinity and extinguishes them on the spot.
Some citizens of Seoul say the city’s government has now become as zealous as Zang.
“It is as if the Seoul city government is trying to create a war between smokers and non-smokers,” said Hong Sung-yong, head of media relations at the Korea Smoker’s Association. “It is quite ridiculous.”
This May Seoul city government added a new front to their no-smoking campaign by designating six heavily-used bus stops no-smoking areas, including one in Gangnam and one at Jongno-2-ga. After observing the public’s reaction, they plan to extend the campaign further and make all bus stops in Seoul no-smoking areas by September.
“We [Seoul city government] have received many civil petitions regarding smoking in crowded, outdoor places, especially bus stops,” said Cho Nam-ju, who is in charge of the no-smoking campaign at the Seoul metropolitan government.
The city government announced in May that it had conducted a survey which indicated that over 90 percent of Seoul citizens had a positive response to their bus stop campaign. “At present, about two months into this campaign, around 77 percent of citizens agree that all bus-stops should be no-smoking areas,” said Cho. 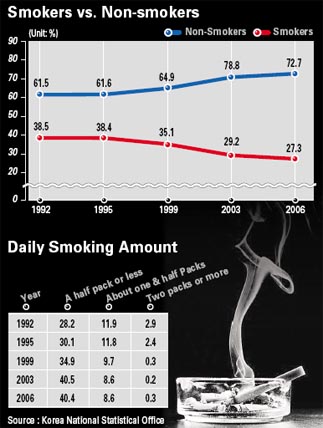 The success of the campaign is yet to be measured, but on a recent weekday, it seemed to be having an impact.
At around 7 p.m. the Gangnam Station bus stop looked a bit different from six months ago. The stop, which is usually filled with at least four or five smokers, had just one. The man looked around the bus stop and realizing he was the only one smoking, put out his cigarette after three puffs. “Nobody else had a cigarette so it felt a bit awkward smoking by myself,” said Kim Hyeon-mo, 32, when asked why he stubbed it out so quickly, “especially with women around.”
The next morning at around 7 a.m. in Jongno-2-ga, the scene was a bit different. In front of a blue no-smoking sign, two men were smoking next to a trash can. Next to them were a group of people including students, elderly men, women and businessmen. The JoongAng Daily asked both men if they had seen the no-smoking sign. “Oh. I didn’t see the sign,” replied Lee Gyeong-sup, 44, who then asked for details of the campaign. He acknowledged that it made sense to ban smoking in places like bus stops. “It’s a place with limited space,” he said. “People can’t really move about to escape the smoke.”
The other man, Park Ho-jin, 24, said that he really didn’t care about the campaign and that as a citizen, he had a right to smoke in outdoor areas. “It’s not a closed-off space.”
The Gangnam-station bus stop had been quite tidy but the Jongno 2-ga station, although cleaner than many of the smaller, more secluded stops in the city, had many cigarette butts scattered around.
As the anti-smoking measures do not yet have the force of law, there are no repercussions if a person smokes at a bus stop ― a point that leaves Lee Youn-ik, president of the 12,000-member online smoker’s group “I Love Smoking” doubtful about the campaign’s success. “[I Love Smoking] is not opposed to bus stops becoming no-smoking areas. There needs to be some sort of protection for non-smokers and we understand that secondhand smoke can be both harmful and disruptive,” said Lee. “However, I feel that the city is pushing smokers into a corner, with no opportunities for smokers and non-smokers to coexist.”
The “I Love Smoking” group has sent the city government a petition regarding the bus stop campaign.
“For example, at relatively major bus stops, we ask that there should be a corner for smokers,” said Lee. “Or maybe the campaign can start by prohibiting smoking during hours when there are the biggest crowds, when people are going to work or going home from work. I don’t think that the city can really anticipate a successful end to this campaign if they keep pigeonholing smokers with no consideration for their rights.”
Many Korean smokers feel like they have been under fire for a long time.
In 2005, a large-scale battle took place when the Ministry of Health and Welfare announced that in addition to the 500 won ($0.55) tax increase on one pack of cigarettes it had imposed in December 2004, there would be an additional 500 won increase in July. The ministry claimed that an increase in the cost of cigarettes would reduce the number of smokers. However, a survey by the tobacco company KT&G suggested that the ministry was wrong. The bill was not passed.
“We held many demonstrations at that time,” said Hong. “First of all, smoking is legal and as law-abiding citizens as well as consumers, we shouldn’t be denied our rights.”
Lee said that the thing that angered him most was the facade that the ministry wears.
“In the end, the government needed money to build the public health infrastructure. The ministry’s public claim that the increase in price is to lower the number of smokers was not the issue at all. The government needs smokers and the taxes they pay through cigarettes.”
In fact at the time, the increased taxes on these cigarettes resulted in double the amount of the existing fund for the public health infrastructure, 1.3286 trillion won. However, only 23.1 billion of that amount was used for no-smoking campaigns. The ministry publically stated that they were spending the money on programs which had the most impact on the general public.
For whatever reason, the percentage of smokers is, in fact, falling. The Seoul city government claims that one reason for this is the gradual success of the no-smoking campaign.
Others, including civic groups like the Korea No-Smoking Research Center, claim that this is a result of the worldwide trend against smoking and the irrefutable medical evidence that the habit has deadly consequences for smokers and those around them. 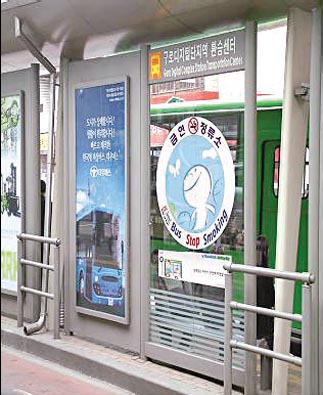 A Seoul city bus stop that has been designated a no-smoking area. Provided by Seoul City Council

According to data from the Korea National Statistical Office, 38.5 percent of Korean citizens were smokers in 1992. This number has decreased dramatically, to 27.3 percent last year.
Those who do smoke are also smoking less. In 1992, 2.9 percent of smokers claimed that they smoked two packs or more a day while 11.9 percent said they smoke one and a half packs daily. These numbers, as of 2006, are 0.3 and 8.6 respectively.
This race toward a smoke-free environment is an international phenomenon. The New York Times reported that the number of smokers in New York City has decreased by four percent, from 1,305,000 in 2002, to 1,060,000 last year. In step with other countries including Japan, Hong Kong and Australia with strong no-smoking policies, experts say Korea has now entered a no-smoking era and that rules against smoking are going to get tougher.
Cho explained that if the bus stop campaign is successful, the Seoul city government will go ahead with plans to make large public parks and tourist sites, including Seoul Grand Park, no-smoking areas along with designating some apartments as no-smoking, if resident’s agree. “By law, only indoor spaces are smoke-free and at present, there are no ways to prohibit smoking in outdoor areas,” said Cho. “However, the city government is starting this campaign one step at a time by designating places that attract a large number of people no-smoking areas. If the campaign is a success, we plan to request the government to designate these places as no-smoking areas.”
Even tobacco companies are getting involved. Japan Tobacco International launched the Mild Seven LSS (Less Smoke Smell) this year. By using special scented filters, LSS is designed to reduce the “smoke smell” of cigarettes.
The public relations head at JTI, Hong Jin-shil admitted however, that the health problems of second-hand smoke still exist and that LSS only reduces the smell. “However, the product reflects the antipathy toward smoking in public places,” she said.
She added that her company is involved in numerous smoking-related campaigns including one to prevent smoking among teenagers. “JTI Korea has also been involved in a ‘smoking etiquette campaign’ for a while, she said. “In Japan, it is reported that 70 percent of smokers carry a portable ashtray. For smokers to coexist with non-smokers, the problem of smokers’ etiquette needs to be addressed.”
Choi Chang-mok, head of the Korea No-smoking Research Center agrees. “Instead of these civic groups complaining about being pigeonholed, they need to hold smoking etiquette campaigns amongst themselves.”
“‘I Love Smoking’ is going to hold an etiquette campaign later this year,” said Lee. “ I think that before more draconian legislation, smokers and smoking groups should be the first to step forward and protect the rights of non-smokers. By doing this, I think smokers can gain respect for their rights as well.”
Cho stressed that the campaign against smoking is “not the result of the ‘big bad city government’ making strict policies,” and that this was what the majority wants. “In the future, it’s only going to get tougher for smokers ― and not just in Korea but globally. It’s a force bigger than just the Seoul city government.”