Tips: Expert says debate is closer to an art than science

Tips: Expert says debate is closer to an art than science 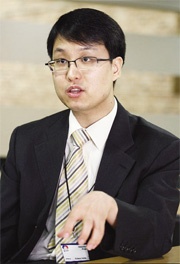 Joshua Park has written a debating book. Provided by the organizer

Joshua Park, president of the Korea Debating Association, offers a few suggestions for winning debate.
“A good debater has well-grounded arguments,” said Park. “The preceding elements include assertion, reasoning and evidence.”
First, for all arguments presented, a clear and accurate assertion is needed based on reasoning. This is called the “because statement.”
For example, if you say that bananas are better than tangerines, you must state why.
However, said Park, it is not enough to state that bananas are better because they are sweeter.
You need evidence.
“You have to back the statement of why bananas are sweeter compared to tangerines,” said Park.
Presenting scientific substantiation or survey results that bananas have a higher sweetness than tangerines is an example.
In terms of refuting of what the opponent has said, Park outlined four stages.
“First, summarize briefly what the opponent believes, then state your own position, and present why you support that position.”
According to Park, if the opponent states that bananas are better than tangerines because bananas have more potassium, the first step is to repeat the opponent’s argument.
“The opponent argues that bananas are better than tangerines, but I disagree because tangerines are better than bananas.”
Then comes the “because” statement.
“Tangerines are better because they contain more Vitamin C,” Park said. “Though bananas have more potassium, it can be ingested through other types of food. Vitamin C is scarce.”
Then would come the final statement: “Therefore, tangerines are better than bananas.”
Park said that the two American leaders, Martin Luther King and John F. Kennedy, had different public speaking styles but both were excellent speakers.
“What’s most important is finding your own debating style. Debate is closer to art than science.”
Park, 29, graduated from Harvard Law School and is currently a Professor at Inha University.

For more information on debate, here are three books.

On That Point: An Introduction to Parliamentary Debate (English) Written by John Meany and Kate Shuster. Published by the Central European University Press.

Introduction to English Language Debate in Asia (English) Written by Brenden Howe, an English Professor at the Division of International Studies, Ewha Womans University.
Debate, the answer to Global Leadership (Korean) Written by Joshua Park. Published by the Nexus Book.