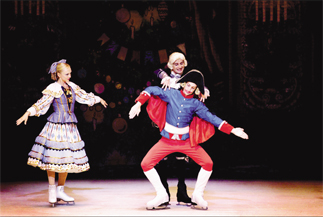 A scene from “The Nutcracker. Provided by the organizers

Instead of dancing in ballet slippers, the members of the St. Petersburg State Ice Ballet will skate their way into spectator’s hearts this summer. The 40-plus company will present “The Nutcracker” and “Swan Lake,” two pieces from their famed compatriot Pyotr Tchaikovsky, at the Sejong Center for the Performing Arts from late July to early August.
Directed by Mikhail Kaminov, a former figure skating world champion who holds a Master of Russian Sports, the company combines classical ballet techniques, such as the pique arabesque, with terms more familiar to ice lovers: axels and salchows. Its dancers-cum-skaters undergo rigorous training in both schools to achieve gracefulness and fluidity on the stage.
The St. Petersburg State Ice Ballet will perform within a proscenium arch and spectators will view the performance from seats facing the stage. In contrast, most ice skating troupes perform in circular rinks that provide a full 360-degree view. It will take 24 hours to transform the stage at the Sejong Center’s Grand Theater into ice.
“The Nutcracker” tells the story of a German girl, Clara, and the dream she has on Christmas Eve about a nutcracker doll, who turns into a prince and marches into battle against the villainous Mouse King’s minions. Originally a children’s story by E.T.A. Hoffman, Tchaikovsky set the book to music in 1892, after Alexander Dumas adapted the story for the stage.
Likewise, “Swan Lake” has a female protagonist, Odette, who falls under a sorcerer’s spell and is forced to endure a dual life as a swan by day and maiden by night. The ballet recounts her encounter with Prince Siegfried, who tries to help her break free of her enchantment.
The St. Petersburg State Ice Ballet has racked up more than 6,000 performances since its formation in 1967 and it has a rich history of touring countries from the United States to China. Past productions include “Cinderella,” “Sleeping Beauty,” and “Romeo and Juliet.”
The formidable cast includes choreographer Konstantin Rassadin, a Merited Artist of Russia who has also worked with the Kirov Ballet. Other figure skating world champions like Svetlana Nikolaeva and Oleg Yagubkov bring a compelling sense of drama.