As a game, Ratatouille is disposable

As a game, Ratatouille is disposable 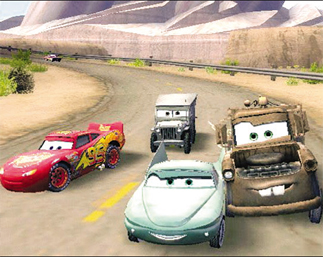 A common problem for video game versions of hit Disney/Pixar films such as “Cars.

Just in time for the domestic release of the Disney/Pixar film “Ratatouille,” the movie’s video game version is making a joint debut, but on a much quieter note and with an unknown number of target players.
The game, to be released on PlayStations 2, 3 and PSP (PlayStation Portable) in Korea, is an action-adventure game in which the player becomes either Remy or Emile, two of the rats featured in the film. Full English versions are available in the United States for Xbox and PC, but not yet in Korea. Of course, the Wii console is not even available in Korea, let alone the Wii version of the game.
Naturally, the storyline of the game is based on the film. The hero, Remy, lives in France and dreams of becoming a master chef, quite uncommon for his sewer-dwelling family. Unlike most rats, Remy dislikes eating ordinary scraps of garbage ― in fact, he actually wants to cook his own gourmet food with herbs and spices.
Although the game integrates aspects of the film’s plot, it mainly stands alone, focusing more on missions that Remy or Emile have to perform in stealing sundry foodstuffs from various locations, instead of actually cooking.
Notably, the original cast recorded the game, and while the audio was not dubbed into Korean, Korean subtitles are provided. The dubbing of character voice-overs has its pros and cons, but in the case of top animated films, it is sometimes nice to hear the actual actors. In fact, fewer and fewer games these days are being dubbed into Korean because players aren’t completely satisfied with the dubbing, and parents of child gamers actually want them to hear English for educational purposes. 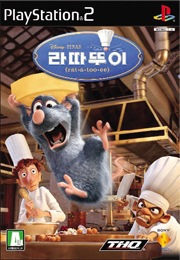 “Ratatouille” is a definite target audience. Although film versions may please adult audiences, the games’ inferior graphics and simplified storylines fail to achieve the same effect. Provided by Disney/Pixar

Whether or not the game will be a success, however, remains to be seen. The console market is so small in Korea that comparing sales figures of individual titles is insignificant, but if we group games into categories, most of the popular console game titles are first person shooting games or more hard-core action adventures.
Also, games made from animated films, such as “Shrek,” “Shrek 2,” “Cars” and “Finding Nemo,” failed to become big sellers in the local game market. In comparison, games that were linked to action-packed movies such as the “Lord of the Rings” series, “The Matrix” or “Spider-Man” series fared a little better.
The Disney/Pixar animation partnership also has the hurdle of having a very unclear target audience in Korea. If “Ratatouille” were a film made specifically for children, like “Barney’s Big Adventure,” the game could have a more specific target player group.
But since Ratatouille appeals to the wider age range that U.S. animated films have been aiming for in the past few years, the positioning of the game is somewhat unstable.
The film may be able to cater to adults, but the game lacks sufficient graphics and storyline for adult players.
At $40 to $50 for a “disposable” game, it is disappointing.
Disney/Pixar should have teamed up with a Korean online game developer to make an Internet-based arcade adventure.