Koreans on a coffee-mix high fueled by caffeine

Koreans on a coffee-mix high fueled by caffeine 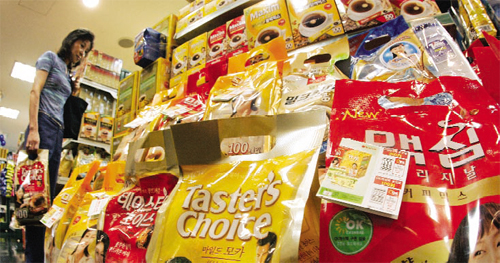 Despite health concerns and the arrival of coffee giant Starbucks, the craze for instant coffee mix, here illustrated, is a major part of Korean culture. Photos by Jeong Chi-ho

Lee Ho-seok can’t start his day without a cup of coffee.
Not the bitter, black liquid from roasted beans. Lee prefers a 12-gram mix of powdered instant coffee, sugar and coffee creamer that comes in a vinyl packet.
The first thing the 29-year-old office worker does when he gets to work is rip open a vinyl package, grab a paper cup, dump in the mixture ― better known as coffee mix ― and stir his eye-opening morning dose of beige liquid jolt.
“This coffee mix works just like magic to wake me up,” Lee says.
He’s not alone.
Taking a dose of coffee mix is a morning ritual that Lee shares with all his colleagues at work.
Their morning dose of instant coffee mix is like a pep pill to start the day. Lee admits that he is “totally addicted” to the beige beverage, which he drinks “at least a couple of times a day.”
Lee is also a fan of Starbucks products, but he says there is “something irresistible” in the small pack of coffee mix.
It appears that the coffee mix caffeine jolt is a necessary part of Korean culture, according to Kim Cho-il, a senior researcher at the state-run Korea Health Industry Development Institute.
Kim says that she was taken aback by research last year showing that coffee mix was the fifth-biggest carbohydrate food source for Korean women in their 30s and 40s, following rice and noodles.
As an energy source, coffee mix ranked 10th, following rice, noodles, pork, eggs and other food items.
The result, which Kim described as “absurd,” came from a nationwide survey on nutrition factors in the Korean diet.
“Coffee mix is not even a food item, but the result shows that it has become an important part of the Korean diet and culture,” Kim said.
Kim was not surprised to hear that during the first half of 2007, the No. 1-selling item at E-Mart, one of Korea’s biggest grocery store chains, was coffee mix. The shopping mall announced recently that it sold 48.4 billion-won’s worth ($52 million) of coffee mix.
To coffee purists the dry mix may taste like ditch water, so why is instant coffee so popular? What’s in it?
Kim So-young, a public relations manager at Dongsuh Food, a major producer of coffee mix products, finds part of the answer in the nature of Korean people.
“Koreans like to get things done fast, as seen in their ‘ppali ppali’ [hurry, hurry] spirit,” Kim says. “It takes only a few seconds to make a coffee mix. All you need is hot water, a white paper cup and the coffee mix.”
Kim So-young says the coffee mix market has been perking up fast.
In the 951.2 billion-won coffee market in Korea last year (except for takeout coffee products at chains like Starbucks), only 37.2 billion won was spent on ground coffee beans. The rest, taking up some 80 percent, or 604.7 billion won, came from the instant coffee market.
“The coffee mix culture gives us the sad truth that people are living in too much of a hurry,” says Kim Cho-il of the state-run health institute.
Dongsuh first released coffee mix in 1976, and it has been the company’s best-selling item since 2000.
Kim So-young cautiously links the rise in instant coffee to the rise of women’s rights in Korea.
“In the past, it used to be the job of female secretaries at offices to make coffee for their superiors, which is now a dying tradition,” Kim explains. “People just make coffee for themselves, and because they want to do it quickly, they find the coffee mix handy.”
Park Mi-hyang, who works as a secretary at a Seoul office, agrees.
She thought about having a coffee maker at her office, but gave up the idea.
“It takes time to brew the coffee, and there is also the inconvenience of cleaning the machine,” Park says.
It is an important part of her daily routine to check if her office’s snack and drink corner has sufficient coffee mix in stock.
“Green tea or other kinds of soft drinks are not as popular as the coffee mix products,” Park says.
Ahn Byeong-soo, a food safety expert, wants Park to stop stockpiling coffee mix. Ahn runs the Food and Health Laboratory and warns that drinking instant coffee is like “pouring sugar, chemical additives and fat in your body.”
Kim Choi-il agrees.
“Out of 12 grams of instant coffee, sugar and powdered creamer, the coffee makes up only 2 grams,” Kim says. Half the pack is sugar. 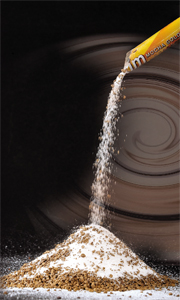 Pouring it on: Drinking a mix of instant coffee, sugar and coffee creamer is a regular routine in the life of many Koreans, despite health concerns.

Ahn notes that the coffee creamer is all vegetable oil and saturated fat.
“A constant dose of saturated fat is highly likely to lead to trouble with the heart and blood circulation,” Ahn explains.
Then he lists ailments that may follow, including heart disease and stroke, along with diabetes.
He also warns that an overdose of sugar diminishes the functioning of white blood cells, weakening the body’s immune system.
“Instant coffee may work as a stimulant for a moment, but a constant dose of the mixture will only lead to one destination ― bad health,” Ahn says.
He says coffee mix contains food flavoring agents that are also addictive, just like the caffeine in coffee.
“We are taking too much sugar, artificial additives and food flavoring agents into our bodies,” Ahn says.
Companies that produce coffee mix claim that they have been making efforts to make their product healthier.
A public relations official for Nestle Korea, who declined to be named, noted that its recent mix contains powdered milk.
Kim So-young of Dongsuh notes that her company’s product allows people to control the amount of sugar in the package.
Companies also claim that their coffee mix contains polyphenol, which works as an antioxidant.
In recent years, instant coffee mix was released with “well-being” labels like many other foods.
But that claim does not convince Ahn. He recommends people quit drinking instant coffee mix cold-turkey and start gulping organic coffee for their fix.
That suggestion may lead to better health, but it also takes more time.
Some, like Lee, don’t have the time to shop for organic coffee beans, grind them, brew coffee and then add honey.
“My colleagues and I do not really bother about the health concerns,” he says.