Still soul searching despite the social stigma and expense

Still soul searching despite the social stigma and expense

Each day for the past three months on the counseling hotline of Far East Broadcasting, a Christian radio station in northern Seoul, a 65-year old man has been calling for help. After a stroke left him a quadriplegic 11 years ago, his life has been reduced to waiting for his wife to return from work. So he calls the station’s hotline.
He calls so often that he knows the names of all the volunteers, including their work hours.
On a recent morning he called Kim Eul-ran, the center’s senior counselor, to talk about a fight with his wife, who supposedly gave him only six of seven required medication pills that morning.
In a gloomy voice, he told Kim that he regretted throwing a bottle of yogurt at his wife.
Kim listened patiently, knowing that some callers seek mental relief before a breakdown.
After an hour, the man asks if Kim would be upset if he calls next week. She approves.
Though all counselors at the hotline are Christian, at no time during a call do they mention the Bible or discuss religion.
“Even in Christian counseling you have to let them know that their difficulties in life are not a matter of their faith,” Kim says. “That’s very important, because the last thing they want to hear is some stranger preaching to them about forgiveness and love.”
Most callers are lonely and just want to talk, because many clinics in psychiatric hospitals only offer medication and have little time to discuss problems in depth. In Korea, psychoanalysts and therapists are rarely allowed to prescribe medication.
Only in specific cases, like domestic abuse, do counselors at the hotline refer callers to social workers or professional agencies. 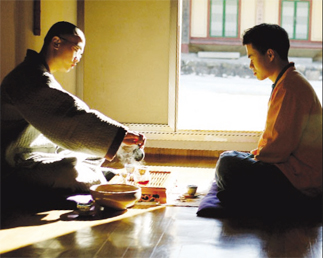 A temple stay program adopted by Buddhists as therapy.

“There is no Korean psychiatrist who would spend an hour talking for free to patients about depression,” says Kim, a Christian counselor for 20 years. “We fill that gap because many Koreans are not even aware of mental health issues. The notion is quite recent. When Koreans encounter problems, they hesitate to seek professional help. They either run into money barriers or face social stigmas. That’s simply the way personal issues are handled here. People don’t tell strangers about their problems.”
Christian counseling in Korea is increasingly using medical professionals in therapy.
Korean Christian Counseling Research Institute recently held a healing workshop. They invited a team of theologians and therapists of Jungian theory to talk about healing using methods that incorporate dream analysis.
Historically, religious counseling has long been a common option in Korea. In a country where visiting a therapist is regarded as shameful by some, many Koreans sought fortune-tellers or psychics for consultation on jobs, marriage or emotional and mental issues.
It is difficult to gauge how sophisticated Koreans are about mental health.
If one Googles the word “career counseling” in Korean, the first listing is a fortunetelling portal site that gives prospective careers and ideal days to buy or sell stock.
Park Geun-hee, a fortune-teller in northern Seoul, said up to 80 percent of her younger clients seek advice on employment and education. 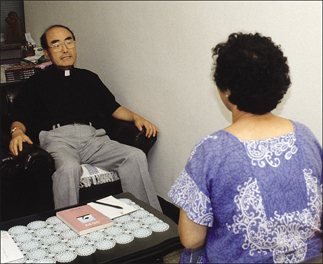 A Catholic priest counsels at a parish. [JoongAng Ilbo]

“In Korea fortune-telling functions like counseling,” she says. “It leads you to talk about your problems.”
As an alternative to medical or professional organizations, counseling and community networks are taking root in Korea within religious institutions. They often stress their religious values.
The Buddhist Counseling Development Institute, for example, recently organized “You Are My Buddha,” a couple’s temple stay program, which includes three days of meditation, art therapy and personality tests.
“The idea began as a way to seek a Buddhist approach to the rising divorce rate in Korea,” says Venerable Damgyo, a Buddhist monk and divorce counselor for the Korean Family Court, who leads the workshop. “We now work with couples, but in the near future we hope to include the entire family in the workshop.”
Last month a group of Buddhist counselors met at Bongeun Temple to discuss integrating Buddhism and psychiatric therapy. In the meeting, a team of Buddhists and medical professionals talked about the role of meditation in therapy as an alternative to Western-style counseling.
Marriage Encounter (ME), a weekend program for couples run by the Roman Catholic Church, is popular within the Catholic community in Korea for settling marriage conflicts and enhancing communication.
“ME is not exactly a counseling network,” says Min Gyeong-yang, an ME leader in Seoul. “It’s not a consulting program either. We function as facilitators to encourage couples to recognize the condition of their marriages and communicate better.”
About 25 to 30 couples meet for ME weekend every month or two at local retreat houses, led by a team of priests and senior couples. During the workshop, participants join a small team to learn about communication and share their experience with other couples. After the workshop, couples break into groups and stay connected as a support group for each other. 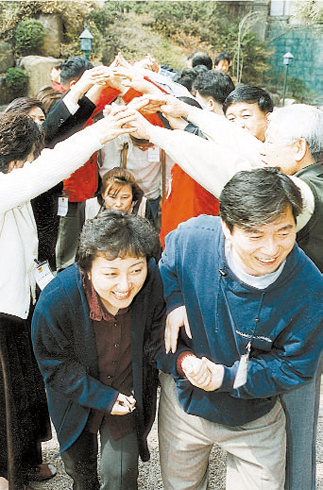 More than 75,000 Korean couples have participated in the program so far, including an average of 10 percent from outside the church.
“It’s a rare chance to openly talk about problems within your marriage with strangers,” says Ahn Tae-shik, who took the program in 2004. “I’ve seen couples who were on the verge of divorce reconcile after they tried it on recommendation of their priests. The program has been very helpful to Korean men, opening their eyes to their partners without having to seek professional help.”
The Catholic churches in Korea also embrace “Enneagram,” a personality test used by churches in parish classes and at retreats.
For some, religious counseling works as an adequate solution for those who can’t afford professional therapy or fear social stigmas.
But unlicensed religious counselors must recognize their limitations.
“The important thing is what comes first,” says Choi Eui-heon, a pastor and psychiatrist at Yonsei Rodem Clinic.
“There are clinicians who use religious ideas in their therapy. Then there are people who use prayer, the Bible or other religious resources as the main methodology of their treatment, which can be dangerous. The problem of incorporating extreme degrees of religion as a counseling method is that they give you a fixed answer without looking at options specific to a patient’s condition. Counseling should help the patients develop their own facility to think and talk about their issues.”