A high kick into top gear for a new star

A high kick into top gear for a new star 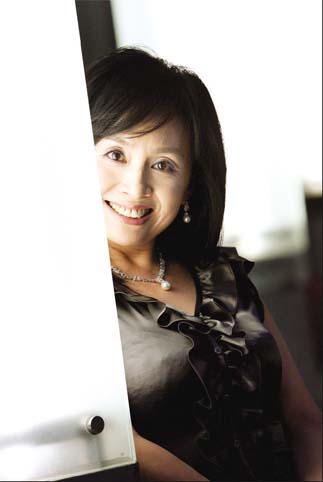 Park Hae-mi is enjoying her popularity as a musical and TV star. By Kim Seong-ryong

The popular sitcom “Have No Fear, Kick High” is memorable largely because of Park Hae-mi’s refreshing laughter.
Park played a high-spirited mother of two children, wife, daughter-in-law and Oriental doctor. In each capacity she exhibited special flair.
Less than a month has passed since the show ended and Park, 44, has been receiving enthusiastic calls from directors and producers.
Right after High Kick ended, Park starred in bonus episodes of “War of Money” and is currently the M.C. of two shows, “The Stories of One Thousand People” and “Park Hae-mi’s Pandora’s Box.”
Park is often called a Cinderella. She made her musical debut in 1984 and has had hard times toiling as an unknown.
“Once, I didn’t have the money to buy milk for my children,” said Park.
But she never thought obscurity was her destiny. She believed that one day she would be a big star. “The more difficult the situation, the more confident I became.”
Park’s confidence was acquired from her mother.
“My mother keeps track of all the family money,” said Park. When the family was pressed for money in the past, it was her mother who was in control. Park wants to be like that.
“She is 70 years old now and still works,” said Park. “I also picture myself working with energy until that age.”
Park’s confidence is what makes her anxiety-free.
Her open-minded and honest personality has also helped her to be a success.
Park said that her parents run nightclubs and casinos. Though some members of the public might frown, Park is unabashed.
“Is running a club something to hide?” she said. “My parents acted fair and square and my siblings and I respect them.”
Under her parents’ influence, Park and her siblings all had dreams of managing a nightclub.
Park revealed her personal story in her book, “The Song of Mamma Mia Donna,” written after her first marriage ended in divorce. She is now married again, to a man who is 8 years her junior.
“If you wrap yourself in layers of secrets, it’s hard to speak in front of the public,” Park said. “You become less truthful.”
Park said that it’s important to be transparent if you want to have a tranquil spirit.
“Plus, when you unveil yourself without being forced to, the public has fewer criticisms,” she said.
Park’s strong will was reflected in High Kick and sitcom fans call her “a nurturer.” Park shared her feelings about that term.
“My TV debut was the SBS drama ‘Dear Heaven’ and I played a mean character,” said Park. “But I had to act out a completely different character in High Kick.”
Although she was offered the chance to appear in a drama written by script queen Kim Su-hyun, she picked High Kick instead because it was more of a challenge.
Park is ready to change again. She is even willing to star as Sin Saimdang, a Korean calligrapher and the mother of Yulgok, a Confucian scholar.
But she has noticed that change is not easy without effort.
Viewers of the two programs say that Park’s M.C.s do not have independent voices.
“I’ll change that gradually,” said Park. Step by step, her goal is to host a talk show under her own name.
Before that happens, Park has a tight schedule.
Her creative musical production, “I Do I Do” is currently running and next week, she will be the classical music commentator for Seoul Youth Philharmonic Orchestra’s performance.
In mid-September, she will perform in Stephen Sondheim’s “Sweeney Todd” (1979), a thrilling musical by one of the world’s leading composers.
“Sondheim’s piece is extremely artistic and, at the same time, quite experimental. The musical notes are dissonant,” Park said.
Amid the discord, Park finds charm in the characters because they hold the music together.
Park said that she feels she is somewhat similar to the character Ms. Lovett in that both concentrate all their efforts on one thing.
“I have a lot of challenges,” said Park. “Despite my appearance and age, I want to prove that middle-aged people like me can become stars.”