Getting the truth on paper

Getting the truth on paper 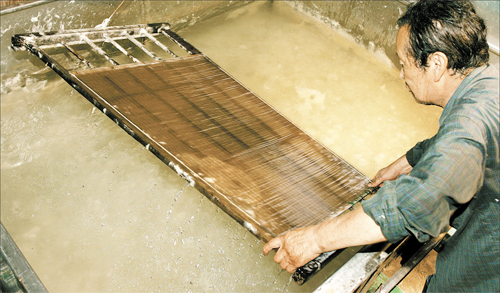 YONGIN, Gyeonggi ―After decades of making traditional paper, Ryu Haeng-yeong’s hands have become bloated and red and his fingernails are begrimed at the edges.
His devotion to paper-making has earned him the honor of being the only craftsman in this field designated as an intangible cultural asset by the central government, although that has not made him a man of means.
His rundown studio greets visitors with a rusted door and fetid smell. But Ryu says he feels rich in spirit, as long as he is with his rolls of paper that, after weeks of labor, are like his babies. Watching a stranger touch his paper with a layman’s heavy hand instantly takes away the smile from his face.
Ryu, now 75, entered the papermaking business in his late teens.
During Japanese colonial rule, his family moved to Manchuria and made a scanty living. After the death of his parents, he came back home to North Jeolla, where he could not finish school due to financial difficulties.
He was ready to do anything to earn a bowl of rice, and happened to hear that the elder brother of his brother-in-law had a business making traditional Korean paper, also known as hanji. 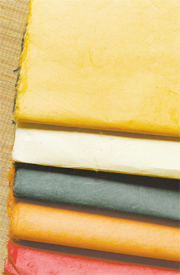 The distant relative, Kim Gap-jong, was a noted craftsman in Wanju County, North Jeolla.
Ryu remembers him as a “craftsman of principle,” who refused to use low-priced imported materials. As Kim’s disciple, Ryu began to develop an interest in papermaking that went beyond his need for a living wage.
“At first, I took pleasure in the fact that the paper made me money,” Ryu recalled with a smile. But he soon found himself drawn to the sheer pleasure of papermaking. He was also grateful to learn that he had a talent for the craft. The result was that Ryu was the only disciple Kim chose to teach all his hanji secrets.
Lee Myeong-hwa, an official for intangible cultural assets at the Cultural Heritage Information Center, said, “We designated Ryu in papermaking as he was verified to be the only one who sticks to traditional materials and methods.”
Ryu explains that it takes about 20 days, some 30 kilograms of daknamu ― pulp from the paper mulberry tree ― and a constant human touch to make about 200 pieces of quality paper.
First, he puts paper mulberry bark into an iron pot and boils it for hours until the black bark is separated from the inner white pulp. Bark, which is rich in fiber, is the main material for hanji.
After resting the bark for a couple of hours, he uses a knife to scrape off the black surface. This is a process that requires years of experience and exquisite skill, Ryu explained. Remnants of the bark’s black surface may lead to a darkish color and defects when the paper is finished. The bark, now white, is hand-washed and then sun-dried for bleaching. Ryu noted that the more this process is repeated, the whiter and better the paper becomes.
Bleaching is still not enough to achieve the quality that satisfies Ryu. In the next step, he burns rice straw and other dried plants into ash. Then he filters hot water through the ash to get lye, which further bleaches and removes impurities in the white bark. The white bark spends a few more hours in the iron pot with the lye until Ryu is satisfied with the purity of its color. A person has to constantly stir the bark to mix it evenly with the lye. The number of hours depends on the amount and quality of the bark, but Ryu take them out of the pot when the fibers are soft enough for them to disintegrate.
The lye is the key to quality papermaking, as it is alkaline, which neutralizes the paper when it is completed.
“The neutrality of the paper is the secret of its durability,” said Kim Sam-ki, an official for paper-related assets at the National Cultural Properties Research Institute. Kim explained that well-made hanji can last millennia, as an old Korean proverb that says “Paper lasts for a millennium and silk lasts for 500 years.” He noted that Korea’s oldest paper was found inside the Seokga Pagoda in the Bulguk Temple, which was built in 751 A.D. in Gyeongju, North Gyeongsang. The earliest record of papermaking is found in the 6th century during the United Shilla Kingdom period.
After being boiled with the lye, the next step is to pound the fibers with a wooden hammer to make them softer and finer. After several hours of pounding, Ryu gets fine threadlike fibers. When he is making colored papers, Ryu mixes extracts from natural dyes, like blue from the indigo plant and orange-yellow from cape jasmine. with these fibers.
Ryu then puts the fibers into a big wooden tub with water and mixes them with fibers from the sunset hibiscus, which serve as a glue to hold the fibers together. 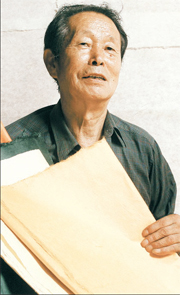 Ryu with finished pieces of hanji. By Kwon Tae-jyun

Then he takes a frame covered with a bamboo screen and dips it into the tub to make a thin layer of fibers. Getting the fibers to an exactly even thickness across the bamboo screen is the core of the process, Ryu explained. After removing moisture from the sheets and drying them in the sun, a piece of hanji paper is born.
The process of hanji making has long been recognized as demanding, said Kim of the national cultural properties research institute
“Hanji is also called baekji, meaning a paper that requires hundreds of human touches,” Kim said. “He never makes compromises in his work,” said Jeong Seon-hwa, Ryu’s apprentice and disciple. “He tries to grow his raw materials himself: He has a small plantation with paper mulberry, sunset hibiscus and indigo plants near his studio.”
But with the arrival of machine-made, low-priced materials from China, Ryu’s uncompromising attitude has made his life hard. He bemoans the current status of hanji making, especially the products found in tourist areas like Insa-dong, central Seoul. “I will not let my paper go to Insa-dong, where everything is cheap and inferior,” he thundered. His obstinacy, however, means that he has limited outlets for hanji sales.
He mostly gets orders from art professors and students of Oriental painting or industrial arts that use hanji. Kang Sam-hye, a curator at the National Daegu Museum, recently bought paper from Ryu.
“I’ve seen many pieces of hanji before,” she said. “But Ryu’s products have the shine and warmth of the finest quality.” Kang’s museum ordered 170 pieces of Ryu’s paper last week for an upcoming exhibition of traditional papermaking that begins tomorrow and runs through November.
Cha Woo-soo, who runs the Korean Paper Association, is another fan of Ryu’s.
“Almost 95 percent of products on the hanji market these days are cheap imports,” he said. “The traditional industry is on the verge of collapse.”
Cha, whose key interest is in diversifying hanji-made goods, noted that the hanji business can be modernized and made into a cash cow. He pointed to recent moves to make hanji dresses and to use hanji in sound system speakers. “When you make threads with several folds of twisted hanji and mix them with other yarns, you get a beautiful cloth, which can be made into neckties or coats,” Cha said.
Making dresses or speakers from hanji might seem too much for a traditionalist like Ryu but in fact, he sees the potential.
“Even the piece of paper that the government used to print my craftsmanship title was Western,” Ryu said. “The government could make a start by using genuinely traditional hanji for appointment papers.”
Ryu’s suggestion is not high on the government’s to-do list, yet he refuses to be disheartened and vows to keep his uncompromising attitude. “Papers do not lie. If you make even a small compromise, it just shows in the paper. It’s an honest work of art,” Ryu said, stroking the texture of his orange-yellow hanji. “My job is to protect this centuries-old art, and I am ready to do that until I can no longer move my fingers.”