The Suwon Hwaseong Fortress Theater Festival is celebrating its 11th anniversary. In 1996 it began featuring experimental theater and dance by merging various genres and formats. This year’s festival runs from Aug. 16 to 25. Performances will be at Suwon Jangan Park, Suwon Youth Culture Center and Gyeonggi Arts Center.
The opening ceremony will include performances by modern French string group M.O.B trio and a multimedia art show, “A Midsummer Night’s Dream,” including works by up-and-coming talents Ga Eun-young and Kim Si-hyeon.
The two highlights for this festival will be “Apropos de Butterfly” by the Jose Besprosvany Dance Company at the Gyeonggi Arts Center on Aug. 21 and 22 and “Black Out” by Kim Nam-jin’s Dance Theatre CHANG at the Suwon Youth Culture Center from Aug. 21 to 23.
Apropos de Butterfly is a reinterpretation of Puccini’s “Madama Butterfly” in which an American soldier falls in love with a Japanese geisha only to abandon her. The classic opera is transformed via contrasting aesthetics and genres. The geisha’s movements resemble a Japanese puppet dance while the others around her, including her lover, Lieutenant Pinkerton, move within the codes of contemporary dance. The 45-minute performance will be accompanied by a recording of the original opera sung by Maria Callas. 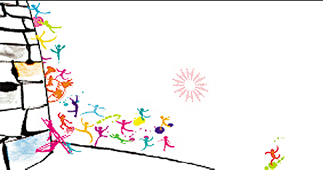 “Black Out” Provided by the organizers

The Jose Besprosvany Dance Company was founded in 1986 .
Black Out recreates Shakespeare’s “Hamlet” by incorporating contemporary dance and avoiding the monologues of the original play. By rearranging the play the director says it is more direct and modern.
“Pyro Musical Fantasy” by the Suwon City Orchestra and choir will close the festival with a performance accompanied by fireworks.