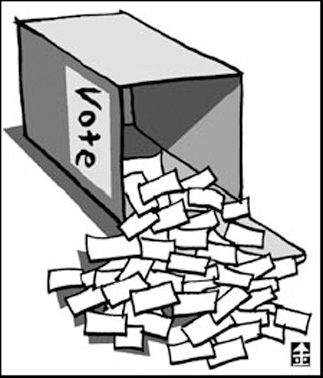 In a democratic society, voting is an essential tool to express political opinion. To vote is regarded as a duty, but not everybody votes out of responsibility. The public choice theory is based on the hypothesis that political behavior is decided by economic interest. Voters calculate benefits and costs in voting and act in a way that maximizes their interest.
But if economic gains and losses are the sole consideration, abstaining is the best choice that voters can make. That is because the chance of one person’s vote having an influence on an election result is almost zero, while one needs to go through a lot of trouble to cast a vote.
However, this theory does not fully explain why people vote. Economists have come up with a supplementary idea. They decided that not only material gain but also non-economic gain come into play when people vote.
For instance, participating in an election, an important political process, can give pride and pleasure to voters, instead of inconvenience. Voters’ evaluation and judgment about current political situations affect turnout rates too.
If people’s self-interest changes a great deal depending on who wins an election, people will be more motivated to vote.
Some maintain that the motivation for voting must be studied from a long-term prospective. Abstention can be interpreted as wanting an alternative political system to democracy. Voting can be seen as way of supporting democracy. If people realize that abstention and political disinterest might tear down the foundation of democracy, they will come up with an utterly different conclusion about the possible costs and benefits from voting. Voting is thus an act to protect the democratic system.
The problem is that voting does not always bring the best results. Kenneth Arrow, a winner of the Nobel Prize in economics, demonstrated that no voting system guarantees consistent results and a democratic voting process does not guarantee that the best person is elected.
Nevertheless, voting is still regarded as the best democratic process because there is no better alternative. A voting system is imperfect but made legitimate through a fair voting process and acceptance of the results.
In the Grand National Party’s primary, turnout rates were unexpectedly high. It seems that this was because two strong contenders battled fiercely until the last minute. At the same time, it seems that many voters in the electoral college figured that their interests would be greatly affected by the primary result.