Imagination in many languages

Imagination in many languages

The Hongdae area in western Seoul is one of the most artistically vibrant places in the city. Its narrow alleys teem with art museums and music cafes.
Next Friday the area’s rich mix will be enhanced by the opening of “Culture Planet Sangsangmadang,” a multidisciplinary arts center. “Sangsang” in Korean means “imagination.”
The arts complex, located at Picasso Street near Hongik University, has a cinema, performance hall, gallery, art market, academy and a studio that will promote cultural exchanges between artists and the public.
“The complex will support independent artists,” said Sangsang’s Hwang Woo-sung.
The cinema will show creative low-budget, independent films. The gallery and art market will support artists through funding and by offering a place for them to display their works.
To celebrate- the opening, various rock musicians will perform in September including Kim Chang-wan, Wiretap, Blackhole, Diablo, Choi Yi-cheol, Han Sang-won, Shin Dae-cheol, Tommy Kim, Groove All-stars and WindyCity.
“The concert was organized to mix old and young independent musicians and meld into Hongdae’s independent culture,” said Hwang.
For example, Kim, the leader of the rock band “Sanullim” was a big star in the late 1970s and early 1980s. He made his debut in 1977 and had hits like “Retro” and “Adolescent.” 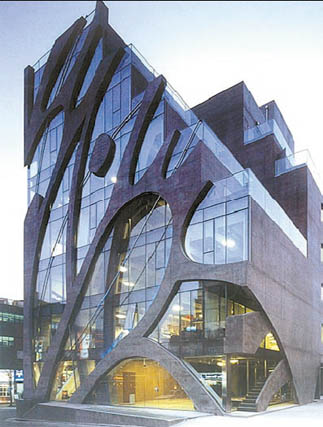 “WindyCity,” a more modern soul group, will also be on stage to celebrate the opening of the complex. The group plays danceable jazz and heavy punk music.
The lot covers 661.16 square meters and is seven-stories high. The complex building is sponsored and organized by KT&G, a leading tobacco and ginseng company.
“The company wanted to share the profit with the public by planning social and cultural activities,” said Hwang. He explained that they wanted to support many young artists in Korea.”