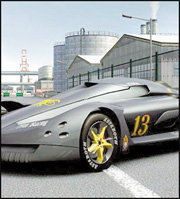 Ridge Racer 7 is a smashing high-speed race game with upgraded graphics. The feature that makes Ridge Racer 7 so exciting is the drift.
The drift sequence only gets better and on some of the tracks the drifting seems like it will never end.
In the beginning the drifts are simple and easy but with higher level tracks things get much harder. The game hardly gives time for players to completely master the drift. The turns are sharp and on some tracks the roads seem very complicated. Some tracks force cars to swerve in every direction. Careful driving is required just to complete a game, let alone win one.
Nitro-boost makes the race more thrilling and it can only be charged up after successfully making drifts. The PS3 has enhanced graphics, especially when it comes to the track backgrounds which include settings like an airport, a harbor and a mountainous neighborhood.
However, there are some disappointing features. For those who like hardcore action where cars burst into flames and the body crumples when it collides with another car, Ridge Racer will disappoint. Contact with a competitor’s vehicle does little damage, although it can throw the vehicle off course. The always-neat race cars make the game seem less realistic. There’s another problem. The game is definitely a drift race but on some of the more complicated routes the drifting player can find himself outrun by a non-drifter.
Another annoying feature is what happens when players choose their cars. The loading of the car’s image is slow. But all in all the game is more than worth its purchase price.
By Lee Ho-jeong