A proposal and a love song

A proposal and a love song 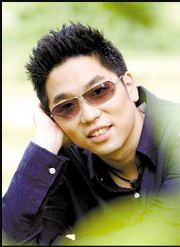 “I am thankful to have you here with me. I’m blessed to have a meal with you and to hold your hand,” sings the 33-year-old singer-song writer Lee Jeok to his ballerina girlfriend on his single, “Relief.”
The song was written as a proposal and Lee will now marry Jung Ok-hee, 30, on Dec. 15. The two will exchange their vows at a Seoul hotel. Lee and Jung met five years ago through a friend.
Jung is the sister-in-law of one of Lee’s close friends. When the two first met, they were not instantly attracted to each other.
“But the second time we saw each other was different,” said Lee. “She was my destiny and I thought, ‘If I were to marry someone, she is the one.’”
Jung is currently studying dance in Philadelphia.
“I miss her everyday,” said Lee. “I only get to see her once in a while.”
Confessing his ardent love, he added, “She is a great inspiration in my life.”
Lee studied sociology at Seoul National University and made his debut as a singer in 1995 with the group Panic.
He has also been a member of the groups Carnival and Gigs.
By Lee Eun-joo