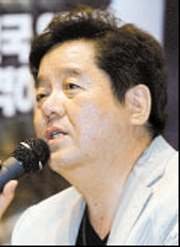 On the to-do-list of “D-War” director Shim Hyung-rae are Marlon Brando and fish.
Shim, who is enjoying a box office bonanza with his sci-fi film D-War despite terrible reviews from critics, said on Monday that he has finished writing a sequel to D-War, along with a few other films which will rely on computer graphics.
One is the tentatively-titled “The Last Godfather” in which Shim plans to revive the legendary actor Brando with computer graphics so he can use Brando’s famous Don Corleone character for slapstick comedy.
Meanwhile, fish will feature in “Fish-War,” an underwater sci-fi film. Shim said that he has already finished an in-depth study of the computer graphics required to make the film work.
D-War, a Korean film shot in English triggered controversy because of its use of the Korean folk song Arirang and a patriotic message from the director inserted at the end.
In his defense Shim said on Monday that he added the epilogue only because he wanted to “commemorate the hardships he went through.”
After selling more than 8.2 million tickets at home, D-War is set to open on more than 1,500 screens in some 60 U.S. cities this week.
Shim said that he is scheduled to meet the former actor and California Governor Arnold Schwarzenegger in Los Angeles before the U.S. opening.
By Chun Su-jin