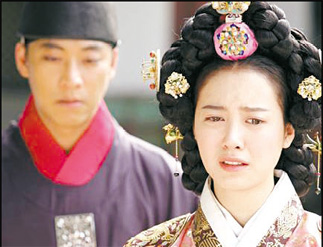 “The King and I,” an intriguing tale about Joseon Dynasty eunuchs. [SBS-TV]

When I lived under the same roof as my parents exclusive command of the remote control was enough to make me feel like the queen of the world. With all due respect and love for my folks, our preference for TV channels did not always match. The preference discrepancy hit its peak on weekends around 10 p.m. That was the time slot for KBS-TV’s historical dramas, such as the mega hit, “Tears of the Dragon,” based on the power struggles that accompanied the establishment of the Joseon Dynasty. Watching them was my father’s favorite weekend occupation, and I can still remember him sitting in front of the TV with a beer.
It was a conventional kind of history drama that tried to remain true to actual events. A narrator or subtitles would appear often to explain the historical background. To a mere teenager, the dramas seemed like another history class, and I would have preferred to change the channel and watch a more superficial weekend show.
Years have passed and I now possess my own remote control and a taste for historical dramas such as “The King and I,” which recently began airing on SBS-TV on Mondays and Tuesdays at 10 p.m. ― of course the show has nothing to do with Oscar Hammerstein’s 1956 musical.
Kim Jae-hyung, who also directed Tears, is in charge of this latest history drama about Joseon Dynasty eunuchs, which proves what my father must have known ― history is indeed a rich source of bloody power games and forbidden love within the walls of royal palaces.
Stories of eunuchs are a sure-fire treasure trove for history drama directors and they are more interesting because they have been assigned to supporting roles within strict stereotypes. However, Kim took an experimental approach in The King and I and brought the eunuchs to the fore. Eunuchs in this drama even undergo taxing physical tests as part of their job interview.
Kim declared that he would “stay away from established history dramas” with this work that tells the story of Cheseon, who became a eunuch to protect the love of his life who was forced to become the concubine of King Seongjong.
This radical approach may explain why the director has eunuchs from different eras together at the same time. Jo Chi-gyeom, a eunuch who amassed considerable power, even masterminds the fatal poisoning of the king.
Director Kim has been criticized for tampering with history, but he does not seem to mind adding his own spices with the facts as the main ingredient. Maybe he should post a warning saying “This drama takes a fictional approach” to avoid confusing some viewers.
Historical dramas with a twist and some imagination are currently in vogue. From this week, except on Fridays, viewers will get to see one each night on KBS-TV, MBC-TV and SBS-TV. The lineup also includes a drama by Lee Byung-hoon, a longtime rival of director Kim. The battle of the history dramas this fall could be intriguing.
Meanwhile, the weekend 10 p.m. slot on KBS-TV remains dedicated to a serious history drama that is faithfully based on facts. My mother tells me that my father’s weekend ritual has not changed and he is still a big fan of “Daejoyeong,” which is considered to be a faithful description of the Balhae Kingdom. Chuseok (Thanksgiving) is coming and I should get ready to have no command over the remote control. Who knows, maybe I will find the serious history drama entertaining. Like father, like daughter. Suddenly I can’t wait for the holiday.