A postcard from Pyongyang

A postcard from Pyongyang 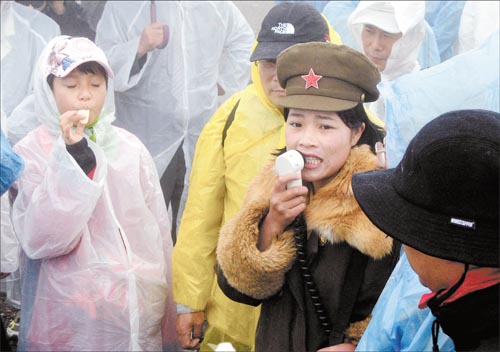 A North Korean guide explains to South Korean tourists why Kim Jong-il deserves to be known as “The Dear Leader.” By Brent Choi

At 10 a.m. on June 28, I boarded a Koryo Air flight at Seoul’s Gimpo Airport, bound for Pyongyang. It took only one hour for the flight, organized by the non-governmental organization Movement for One Corea, to arrive at Pyongyang’s Sunan Airport, a two-story building bearing a large photo of the late North Korean leader Kim Il Sung ― not exactly an impressive sight for an airport.
There were 14 aircrafts at Sunan, including one helicopter. Seven were jets and six were old-style propeller planes. Most seemed in disrepair and sat beneath large covers. There wasn’t a single foreign plane there, a reminder of how isolated North Korea has become.
Four tourist buses came to fetch us. Each one carried about 30 visitors. About half were members of the Movement for One Corea. The rest were paying customers like me who had forked over around 2.5 million won ($2,750) for the tour of the North.
Several North Korean guides, who seemed rather shy, met us. They warned us not to take photos while the bus was moving and not to approach local people.
That afternoon our group toured Pyongyang. We first went to Mansudae to see a giant statue of Kim Il Sung. The guides lined up visitors in four groups and bowed low before the statue, in the manner of a Japanese person stooping before their emperor. Less than a tenth of our party followed the guides’ example.
Most were more impressed by the sheer size of the statue and wanted to take a picture. My roommate, a man named “Jo,” the head of a sewing factory, started taking pictures like crazy, using four different cameras.
I was a North Korea specialist for one of the major dailies in South Korea for almost a decade. In the eyes of the journalist that I am, North Korea seemed to have long ago lost sight of the balance between the spiritual and physical worlds.
Wherever we went there were slogans saying “Revolution” and anti-Japan exhortations, along with praise for Kim Il Sung and Kim Jong-il by female guides who spoke as if they were still living the 1930s.
The North’s excessive deification of the two Kims seemed ironic, given that its ideology is based on Marxist-Leninism.
I stayed at the Yanggakdo Hotel near the Taedong River. It was in a relatively good state with abundant food and clean rooms. But it was reserved for foreign visitors. The rest of Pyongyang still seemed to be struggling with the “Arduous March” that began in the 1990s. The grey, sordid building next to ours seemed like it hadn’t been repainted or repaired in any way for at least 10 years. The roads were also bumpy with cracks.
Passersby, men in gray suits and women in traditional hanbok, all looked tired and depressed and looked at the ground. Only the little children shot occasional glances toward our modern foreign bus, a rare sight in Pyongyang.
Our dialogue with the guides proved to be one of the most interesting aspects of the five-day trip.
At first the visitors and guides gave basic introductions and began talking about non-contentious issues like the weather. After “testing the waters,” the North Korean guides then began to ask about South Korea’s political situation including the upcoming presidential election, while the South Koreans barraged the guides with questions about nuclear programs. Not everyone was engrossed in politics. Some guys asked about local women.
The guides I met this time differed from those I encountered in the past. When I visited Mount Kumgang in 1998, all the guides were over 50 and would start arguments with visitors over things like unification and the presence of U.S. forces.
The guides in Pyongyang were much younger, mostly in their 30s. It seemed like a rapid generational change is under way in the North, with the older generations who survived the struggle against Japan or the Korean War, and even those who grew up under Kim Il Sung in the 1970s and 1980s being supplanted by those in their 30s and 40s, the so-called “Arduous March” generation who were teenagers during the famine years of the 1990s.
Our young guides were from this group and displayed a strong loyalty toward Kim Jong-il. They belonged to the elite class of the country, having graduated from Kim Il Sung University.
These guides didn’t bother to hide the tough conditions faced by North Koreans. When I asked about the food situation, they replied that everything was “tense” and rations were suspended from time to time. When that happened they came to Pyongyang Market a couple of times a week to purchase rice. If that was the life of young elites from the ruling Workers’ Party, I was afraid to ask about the common people. 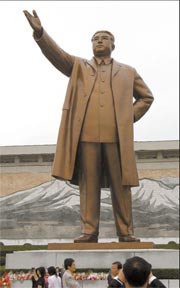 However, from the bus window I could see people flocking to fish in rivers, lakes and just about any little puddle they could find that might contain some food.
The energy supply wasn’t good either. We went to Mount Myohyang on the third day. During a two-hour ride from Pyongyang I saw only nine cars; two Mercedes that belonged to high officials, four of our tour buses, two trucks and an old bus.
Pyongyang is divided into 10 administrative districts. At present they receive electricity in turns. Even the Juche Tower on the Taedong River turns off its lights at 11 a.m. Outside Pyongyang the hardships must be far more severe.
One of the guides insisted that the “war-mongering” United States had provoked the North into developing a nuclear program. He added that the United States can never be trusted. It sounded like the North would never give up on its nuclear program.
It seemed like even these new, young guides didn’t really understand the contradictions and problems within the regime. I told the young quides that to end its isolation and improve its economy, the country must improve relations with the United States by giving up its nuclear program and adopting some of free market principles.
The young people in the North didn’t seem to understand this. For example, I asked one guide about prices ― a basic of the market economy.
He said prices are determined by “the state authority.” He and his colleagues knew nothing about concepts like marginal cost or profits. I realized it was useless to mention interest rates, inflation or foreign exchange.
The guides were also nostalgic for the past. “In the ’80s we were able to buy cheap rice, fish and clothing,” one pretty guide told me, adding that the North’s goal is to return to this “golden era of socialism.”
The guides knew next to nothing about life overseas. Only two out of 10 guides had visited Seoul. Nobody else had been outside North Korea and nobody spoke English or Chinese.
On the other hand, they were both “well-informed” and “ignorant” about the situation in Seoul. They seemed to know all the little details of the nomination race between Grand National Party candidates Lee Myung-bak and Park Geun-hye, yet they lacked the political common sense to interpret them. To them the Grand National Party was a synonym for “the bad party,” just as Washington was a synonym for evil.
A tailor’s shop on the third floor of the Yanggakdo Hotel was the most popular place for tourists. Complete suits were priced at $130, half the cost of a similar garment back in Seoul. I bought one and it was no different from those made by skilled tailors in the South.
The problem was that the tailor had limited raw materials. When the tourists heard about the shop 100 of them rushed to place an order, but it could only satisfy the first 20 people.
I couldn’t understand this. The tailor could have earned much-needed foreign currency. But she lacked the fabric and staff and she needed permission from above to get more of either. “North Korea has truly screwed up its distribution of resources,” one professor on the trip said.
Another example of the “screwed-up” economy was our hotel. The Yanggakdo was built in 1995 and is supposed to be the best in Pyongyang. It has 47 stories and 1,001 suites, yet only 300 rooms were occupied during our stay ― a 70 percent vacancy rate.
“If this was Seoul, you’d probably be fired for leaving the place this empty,” I told the hotel manager. He wasn’t the least bit impressed. “My duty here is to make sure everyone is comfortable. It’s the state’s responsibility to bring in the guests,” he replied.
I came to realize that the inefficient management of the North Korean regime stems from this “instruction policy” in which everything is determined by one person ― Kim Jong-il, the Chairman of the National Defense Commission.
North Korean society revolves around instructions given by Chairman Kim ― literally.
On the fourth day we went to Okryugwan, a famous naengmyeon cold noodles restaurant, where the food lived up to its reputation. I complimented the guide and she said the tasty noodles were thanks to “The Dear Leader.”
According to the guide, Kim instructed the cook how to make the soup and where the vinegar should be added, in the soup or in the noodles. I thought she was kidding but her expression told me otherwise.
Then I learned that Kim Il Sung University teaches that the Goryeo Kingdom (918 to 1392) was the first kingdom to unite the Korean Peninsula, instead of the Silla Kingdom (57 BC to AD 935) as believed by the South. Until the ’60s, the North learned the same thing as the South but then instructions to change came from above.
Having the same leader intervene in every little decision from food to history is bound to extinguish the creativity and richness of people and culture.
North Korean propaganda is also a source of inefficiency. Around 75 percent of television news was filled with the late leader Kim Il Sung’s past activities or praise for current leader Kim Jong-il. The media in South Korea is an agent for change, because it shows new developments around the world. In the North it blocks society from growing up.
North Korea’s Juche ideology is about self-reliance, but the people of this country long ago lost the ability to stand on their own feet. They blindly hang on to every word and action of their single leader.
Back on the plane, two thoughts crossed my mind.
First, how long will the North be able to withstand this inefficient regime? Second, if the North is able to maintain its backward-looking society through isolation and propaganda, perhaps it will last longer than anyone imagines. Only the future will tell.