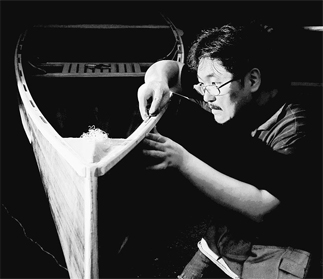 Choi Jun-young has no regrets about deserting his successful career as a professor to begin making bespoke boats. By Kwon Hyuk-jae

As a child, Choi Jun-young was on a family outing from Seoul. There, on the sparkling sand, beside the shimmering sea, Choi confronted his destiny.
There was a boat that had been turned upside down in order to dry and the sight made his hair stand on end.
“I realized that a boat is the most beautiful thing in the world,” Choi said. No wonder he has cedar sawdust on the floor of his office at “Oliber Boat,” his boat-building company.
However, it took Choi many years to make his dream come true.
Until 2005, he worked with a mouse in his hand, not a saw. He taught communication design at the Samsung Art & Design Institute, having worked as a director at INNO Design, a prominent design company, from 2002 to 2003. He studied design in the United States and also worked in England. However, he could not forget the upturned boat from his childhood.
So Choi promised himself that he would begin a new life when he turned 40. And he kept his promise. This year saw Choi’s 40th birthday and his name card says that he is a boat builder.
The opportunity came to him in 2005. He had taken some time to work on a plan for improving ship design, which won a competition for research funding held by the Commerce Ministry.
Without hesitation, Choi tendered his resignation and flew to the United States. He was not afraid of making a new start, although he felt some regret about giving up his successful and stable job at a conglomerate. Objections from his wife were another obstacle.
However, Choi was insistent about making his dream come true. When he returned home in April, Choi opened a boat-building workshop and a studio in Daehangno, central Seoul. His studio, named after his company, gets lots of visitors who mistake it for a fancy cafe with a nautical theme. However, Choi is kind to such people, because he welcomes any kind of interest in boats.
Choi makes only hand-made wooden boats using hammer and saw.
“Unlike boats made of plastic, wood demands more obedience and humility,” Choi said. “There are certain limits to the lines that the wood will allow and human beings have to work within that boundary. Making a wooden boat is a good way to learn how to be humble.”
Although Choi wants his kind of boat culture to spread, he does not compromise on price.
His canoes are priced at 6 million won ($6,560) to 8 million won and kayaks from 10 million to 12 million won, so he does not expect to have a flood of customers. Since he opened his business, he has had five paying customers and he spends many days working on his own boat.
Meanwhile, he earns money by offering classes where people learn boat building skills for around 1.5 million won a month. He is also planning to open a boat-making school on the Yellow Sea sometime next year.
“A boat is like a house built on water. It is such a rewarding job to build a house with my own two hands and see it float over the waves,” Choi said.