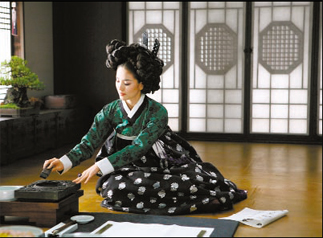 Appearing on-screen is a young woman with smoky eye make up, peach-toned blush and a lush purple dress.
To go with her black silk jacket finely embroidered with a golden flower print, she put on a black lace hat almost as big as an umbrella, with a piece of chiffon that drapes down to her shoulder.
It’s hard to tell if this is the Hwang Ji Nyi we know ― a renowned 16th-century gisaeng and a poet who always appeared on screen with pale cheeks and red lipstick matching her dress, ridiculing aristocratic society with wit and scholarly insight.
Instead, what we have is an expensive period drama, which took four years in production and 7.1 billion won ($7.7 million) to complete.
Visually, however, the money pays off in the film adaptation of Jang Yoon-Hyun’s “Hwang Ji Nyi.”
Whether in designer-made costumes or the period settings, the film glows with style, providing a poisonous glimpse of the self-deprecating heroine who led herself to tragic isolation through her seductive character.
But instead of her literary gifts admired by so many authors and directors of movies and TV dramas in the past, Jang focuses on melodramatic tensions between the heroine Ji Nyi (played by Song Hye-gyo) and Nom-yi (Yoo Ji-Tae), Ji Nyi’s admirer since childhood.
Perhaps their romance is what makes Jang’s latest remake so different from other films about the heroine’s eventful life.
The film revolves around the secret of Ji-nyi’s birth.
Having been brought up in an aristocratic family, she lives a protected life surrounded by her family’s support.
But upon learning that she was the child of a mistress, she is faced with the choice of living as an aristocrat’s mistress, killing herself or working in a brothel.
She resorts to the last option.
Based on a famed novel by North Korean writer Hong Suk-jung, the film takes a brief departure from the central theme of the heroine’s life by resorting to the secret romance between Ji Nyi and Nom-yi, who proves his loyalty in every way he can, for example by crushing the testicle of a male aristocrat who deflowers Ji Nyi at a gisaeng house.
The romance between the two is a radical shift from the original story of Hwang Ji Nyi.
And perhaps parts were a bit overdone, especially after Nom-yi became a Robin Hood, and the film begins to wobble
But one of the film’s ultimate failures is its miscasting, a risk the film couldn’t have avoided.
As predicted, Song does not possess the same charisma of a femme fatale exuded by young actresses who played the role in the past, like Ha Ji-won from a television drama “Hwang Ji-nyi.” Despite Song’s mediocre performance, her presence on-screen does not go beyond the simple display of a pretty young actress in designer costumes in a period movie.
The restrained dialogue on Yu’s part also does not capture the melancholy and struggle endured by Nom-yi to add a layer of thoughtfulness to his character. Perhaps Yu’s image we remember is far too modern and edgy for a classic Robin Hood on screen.
Nevertheless, the artful style in Hwang Ji Nyi is something that deserves more credit, separate from the debate of historical accuracy.
It takes a great leap from artful period dramas like “Scandal” or “Forbidden Quest” to a level of production art we’ve never seen before, completely altering the notion of tradition.