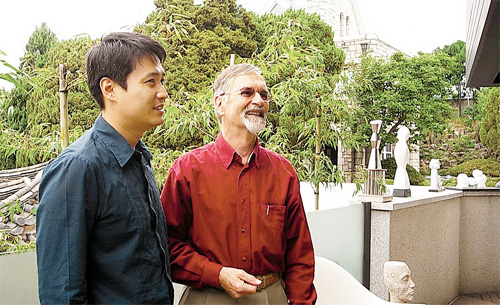 Jinho Choi used to be a fashion model. Robert Liddicoat was previously an art teacher at an Australian college in New South Wales.
Now they are a father and son-in-law team of artists.
Their second exhibition as a duo, “Kimchi meets Vegemite II,” will open tomorrow evening at the Kyungin Gallery in Insadong, central Seoul.
“It’s an exciting moment,” said Liddicoat, who has been painting throughout the early days of fall so he can show fresh canvases at the exhibition. “Last year’s exhibition was a great success.”
The force that swept Choi and Liddicoat together is one that is becoming more common in Korea ― a marriage between a Korean and a foreigner.
Such marriages were once frowned upon but now they account for almost 10 percent of all marriages in Korea. Choi’s marriage to Mary-Jane Liddicoat, Robert’s daughter, seems to be a textbook example of how such marriages can help inject vitality and diversity into Korean society.
Mary-Jane Liddicoat is a high-ranking diplomat at the Australian Embassy in Seoul. She met Choi at the Westin Chosun Hotel. Their romance led to a marriage, two children and a partnership between her Australian father and her Korean husband that is a source of creative energy for them both. 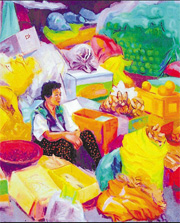 “Ajumma with Spices” by Liddicoat.

Goethe wrote that art thrives on love or tragedy, and in Liddicoat’s case it seems to be the former that drives him, at the age of 67, to do some of his best work.
This is apparent as he plays with his granddaughter Romy, 3, and his grandson Sam, 4, in the living room of Choi’s house in Bukchon.
Scattered around the room are a mix of toys, sculptures and canvases, the last a blaze of colors depicting the markets of Seoul or the fall foliage from the mountains around the city.
“The children have been so exhilarating for me,” Liddicoat said. “It’s been many decades since we had children of our own.”
Liddicoat’s daughter was 38 when she decided to have children. Sam, who had been expected to arrive in July 2003, was born on June 24, his grandfather’s birthday.
“That was a surprise,” Liddicoat said. “It reinforced my desire to paint. I want to leave my grandchildren a legacy that I hope will inspire their creativity.”
As the painter spoke, the sculptor got his children ready for school.
Choi mostly works in granite, marble and sandstone. His work is abstract and focuses on the human body. His pieces have an austere beauty with hints of Henry Moore and Rodin, a quality that has served him well through six solo exhibitions and a variety of commissions for public buildings in and around Seoul.
As the sculptor hustled to get to his studio ― he still needed to finish pieces for tomorrow’s exhibition opening ― Liddicoat confessed that his son-in-law has been a major influence in the evolution of his painting.
“My extended Korean-Australian family has brought me closer to the Korean way of thinking,” said Liddicoat, who had his first exhibition here in 2001 and began painting Korean landscapes before his daughter met Choi. “Jinho pushed me to the next level by introducing me to the work of Lee Dai-won.”
Lee is one of Korea’s most accomplished artists. Born in Seoul in 1921, he traveled extensively in Europe and synthesized the Chinese calligraphy style of painting he had been taught in Korea with the techniques of Impressionism and Expressionism.
“Lee interpreted Western traditions and made them his own,” Liddicoat said. “I was awed by his work. I wanted to see the world with the same vision.”
What resulted were canvases that sparkle with color. One critic said that Liddicoat “seems to have a special prism in his eye,” but it’s more that he has a way of taking complementary colors and making them dance with each other. 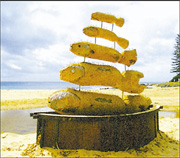 “Fish and Chips” by Choi. By Ko Juran

His paintings of Korean forests in the fall, which will be featured in the Insadong exhibition, are a painterly version of the tango. Like that dance, everything is a vibrant synthesis of contradictions, of light and dark, red and blue, male and female. And in his “Ajumma with Spices” the expressionist influence of Lee is plainly visible.
“I love Seoul’s markets,” he said. “I see so many scenes there that I want to paint.”
Liddicoat prowls Namdaemun and the other Seoul markets armed with a camera. He takes a series of photographs and makes several sketches before he begins to paint. Consequently his works are closely observed and full of detail.
“I feel blessed to have all this in my life,” he said. “Korea has given me grandchildren, a second home and dozens of paintings.”
Kimchi meets Vegemite will run from tomorrow until next Wednesday. For more information, visit www.mjarts.net.