Still standing after all these tears

Still standing after all these tears 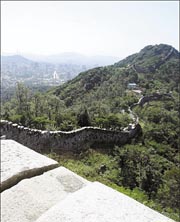 A view of the Seoul fortress wall.

Thirty-eight years ago a gunfight erupted on Mount Bugak between South Korean soldiers and armed secret agents from North Korea.
Led by Kim Sin-jo, who had infiltrated from the North, the agents had concealed themselves on the mountain, waiting to attack the Blue House .
One pine tree in the vicinity of the 1968 battle was hit by 15 bullets.
Ever since the incident, the area has been a security zone and the ancient fortress walls that ran through the area were off-limits. Today the bullet holes in the pine tree are marked with white chalk, highlighting the sense of drama.
According to one of the fortress guides, a military official recently removed a tombstone that had stood next to the tree, engraved with the words “Let us not forget.” It had been put there to remind to officials and guards of what has come to be known as the “January 21st incident.”
Large sections of the fortress walls around Seoul that were once closed have recently been reopened to the public and they are dotted with reminders of Korea’s tumultuous modern history.
In 1907, a section of the walls was demolished by Japanese authorities under the guise of urbanizing Seoul, in preparation for the visit of Japan’s crown prince Yoshihito, who later became Emperor Taisho.
But the demolition was also a symbolic insult to the historical sovereignty of Korea, which was officially annexed by Japan three years later.
As an exercise in restoring lost pride and enhancing the appeal of Seoul as a tourist destination, Seoul city government and the Cultural Heritage Administration are working to rebuild the demolished portions of the fortress wall, which was originally 18.2 kilometers long, by 2015.
There are currently three walking trails and most experts recommend beginning at Malbawi, a lodge near the rear gate of SungKyunKwan University, and finishing at Changuimun.
This is mainly because starting the other way around involves a steep climb up 2,500 steps before arriving at the fortress wall.
On the way to Malbawi and the mountaintop trail, there are a couple of observatories with views of Seoul. At Malbawi, visitors sign up for entry to the fortress ― there is a quick ID check to make sure nobody is a North Korean secret agent. The walls come into view soon after.
King Taejo, who was responsible for transferring the capital of the Joseon Dynasty from Gaeseong to Hanyang, Seoul’s original name, in 1392, commissioned the Seoul fortress. King Sejong (15th century) and King Sukjong (17th century) both ordered extensive maintenance work.
It’s hard to believe that the construction of the walls on this mountainous terrain took less than 100 days to complete ― it’s tough enough to climb over the rocks with just a small backpack.
Over 118,000 civilians were mobilized during the first construction period, with an additional 79,400 men used for the second phase between August and September 1396. In all, 320,000 laymen and 2,200 engineers were mustered to complete the project, an astonishing number considering that the population of Seoul was only around 100,000. By the end of construction the death toll had reached 872.
At intervals the walls are engraved with Chinese characters that indicate the date a section was built and the names of the district and engineer involved.
Three kinds of stone were used in the fortress. One is natural stone trimmed to the size of a fermented soybean block. 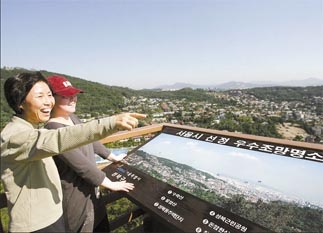 Later walls built in 1442 used a mix of rectangular stones of varying sizes. The parts added in 1704, the 30th year of Sukjong’s reign, were cubes 60 centimeters each side.
About half an hour after passing Malbawi, Sukjeongmun appears. This northern gate was used only during droughts to bring rain.
Being to the north, the gate was associated with “yin,” the feminine energy, and it was said that if women visited the gate three times before the first full moon of a new lunar year, then the nation would avoid all misfortunes.
People were said to have asked authorities to keep the gate closed on the grounds that if it were left open, the women of Seoul would become lustful.
The highlight of the fortress is Chotdaebawi or “candle rock,” which is 13 meters high.
At the end of the route is Changuimun, which is one of the four main gates of Seoul. It’s the smallest of the city’s four main gates but it has one of the most unusual sculptures in the shape of a lotus leaf and a phoenix, near the gate’s tower.
Originally the bird was a rooster, but it was later replaced with phoenix because the gate’s surrounding landscape was in the shape of a centipede. The rooster is an enemy of centipedes, according to a traditional fortune-telling theory.
The full walk takes a good two to three hours. Officials of the Seoul Fortress project say, “Admire it and compare it with the Great Wall of China.” 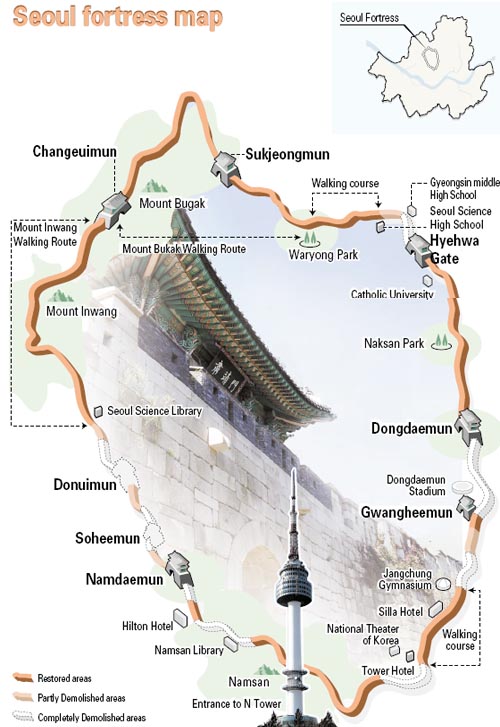