Markets that thrill the four senses

Markets that thrill the four senses 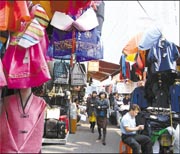 I have seen so much of Seoul in its markets, which have a history that stretches back four hundred years.
There’s the mix of wealth and poverty represented by well-heeled shoppers walking through Namdaemun on their way to Shinsegae, past stallholders who scrape a living from counterfeit purses and live on bamboo mats at the back of their storage lockers. Add to that the ajumma selling bbeondegi (boiled or roasted silkworn larvae) alongside the row of opticians and one has a study in contrasts that has fascinated dozens of visitors.
My favorite spot in the warren of streets that is Namdaemun, (www.enamdaemun.co.kr) my favorite market, is the E-Dong Daedo Jonghap Sangga. In the basement are shops with imported goods. These are a relic from a time when it was hard if not illegal to import certain products from the United States. These stores filled the gap with products that were smuggled in, often through the U.S. army base.
Now it’s possible to get foreign goods of better quality elsewhere and shoppers in this section had better beware. On a recent trip I was offered coffee that was three years past its sell-by date, almonds that, when opened, small bugs flew out, and underwear with the curious brand name “Body Gay.” I think, in the latter case, the Korean manufacturer was either not aware that “gay” is synonymous with “homosexual in some parts of the world, or they have an exquisite sense of irony.
The real treat here is on the third floor. In the movie “My Fair Lady” the irreplaceable Audrey Hepburn opens the film as Elzia Dolittle, a flower girl from London’s Covent Garden. That flower market no longer exists but Seoul has one of its own which is outstanding and has its own flower girls who scurry around selling armfuls of roses or irises for very cheap prices.
The tiny apartments that are so common in Seoul cry our for flowers and the Namdaemun flower emporium is the place to find them. The sweet smells here are also the best way to purge the sour smell of bbeondegi.
Outside of the flower market building is a row of shops that sell army goods including uniforms, boots, compasses and telescopes. Every time I step into Namdaemun, or its brother Dongdaemun, with its Doosan Tower that specializes in wholesale clothing, I find something new and thrilling. Visit with an empty stomach, an open mind a full wallet and a good time is guaranteed. Be sure to save some won to buy ginseng roots and jujube for the world’s healthiest cup of tea.